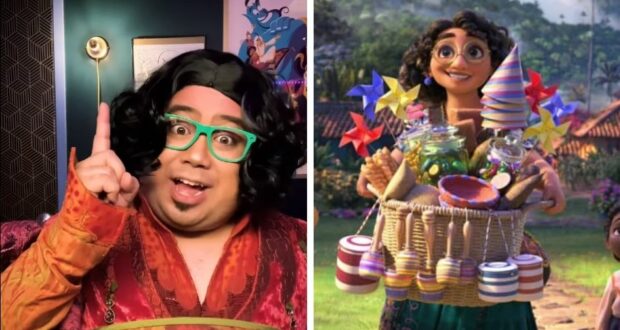 Even though the plotline and animation of Encanto has been winning both awards and fans’ approval since its premiere in November, the Walt Disney Animation Studio animated movie has received most of its praise or hype for its music — and now one Disney character is channeling Mirabel Madrigal from an entirely different Disney musical!

Don Darryl Rivera, the Broadway actor who is currently playing Iago in Aladdin on Broadway, took to Instagram to share his interpretation of “The Family Madrigal”.

“The Family Madrigal” is an introductory song in Encanto in which Mirabel Madrigal (the protagonist) introduces her family members to children from Encanto as well as the audience. The song is fast-paced and catchy, but since Don Darryl Rivera is playing a fast-talking character like Iago, he’s more than capable of keeping up with voice actor Stephanie Beatriz (who voiced Mirabel and sang the original song).

One of the most amusing aspects of this Instagram reel is the fact that Don Darryl Rivera is still in his Iago costume backstage on Broadway while he’s ‘performing’ “The Family Madrigal! Any Disney on Broadway musical includes beautiful costumes, but the Aladdin costumes are always colorful and vibrant, so Iago’s clothing is a nice parallel to the colors that permeate Encanto.

Rivera acts out the roles of each child in the Madrigal family, ranging from Dolores to Camilo. He changes wigs and hairstyles for each character (or adds glasses for Mirabel), with fun dance moves as a bonus!

Four other Aladdin cast members are featured in the reel as well. Brad Weinstock, Milo Alosi, and Zach Bencal provide back-up vocals, while Dennis Stowe makes an appearance as Jafar to help illustrate the shapeshifting ability that Camilo possesses. The Aladdin cast has posted several funny reels or videos on Instagram, including a recent video that was part of the “Beyonce Drop” challenge.