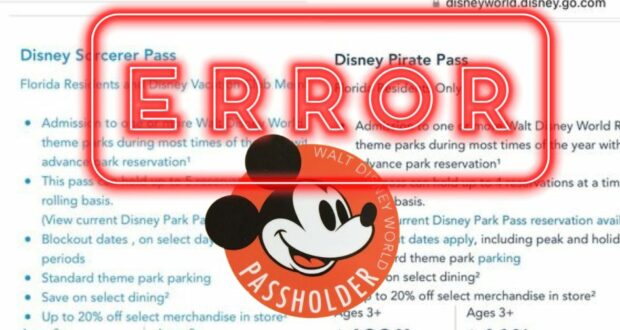 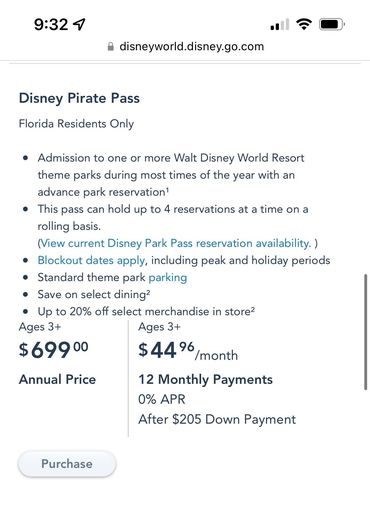 The Annual Passes that were briefly and incorrectly listed as available on the Walt Disney World Resort website were the Disney Pirate Pass and the Disney Sorcerer Pass. Judging by the now-inaccessible webpage that showed the two Passes’ details, the Disney Pirate Pass is the cheaper of the two, costing $699 annually while the Disney Sorcerer Pass costs $899 annually. Both Annual Passes have similar benefits including admission to one or more Walt Disney World Resort theme parks, 4 or 5 reservations, “standard theme park parking”, some savings for dining experiences, and some merchandise discounts. 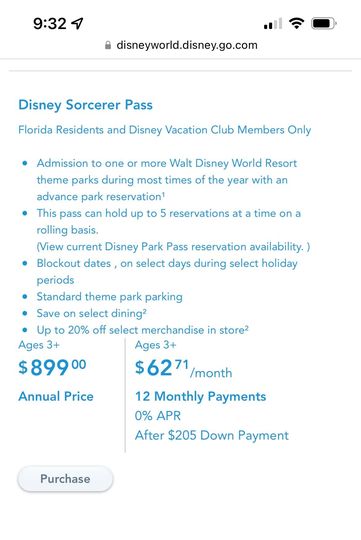 You can see screenshots of the Annual Pass details in the images above!

The two Annual Passes that were incorrectly advertised as available are for Florida residents only (although the Disney Sorcerer Pass is also open to Disney Vacation Club Members), so any Walt Disney World Resort Guests who are not Florida residents or Disney Vacation Club Members would have been disappointed (much in the same way that any Disneyland Resort Guests who are not California residents have been missing out on lots of Magic Keys). The Disney Incredi-Pass has consistently been listed as unavailable.

Annual Passes were listed for sale earlier this morning (for FL and DVC). This appears to have been an error. The passes are now listed as “currently unavailable.” pic.twitter.com/zCJbClEsbW

While the two Annual Passes were mistakenly being listed as available for purchase, any Disney fans who do not live within the state of Florida would still have been unaware of the change, simply because a Florida resident needed to sign into the Disney website to view the Annual Pass page. Disney does point this out on the Walt Disney World Resort website, saying next to the sign-in option that “special products and prices may be available for Florida Residents and Disney Vacation Club Members”.

Now, both Annual Passes (along with the Disney Incredi-Pass) are listed as unavailable again. Disney has gotten Annual Passholders’ hopes up for some Walt Disney World Annual Pass theme park visits– but hopefully, this accidental post means that the Disney Pirate Pass and the Disney Sorcer Pass will return (for ‘real’) soon!