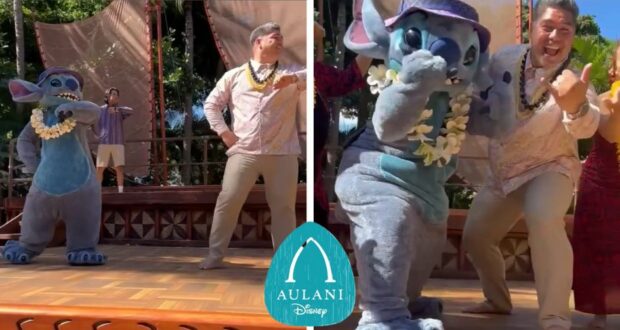 Kanoa Kawai became the Disney Ambassador for Disney’s Hawaii-based Aulani Resort and Spa last year and showed off his skills as a vocalist and as a ukelele player at the time (as well as recently in Paris). The gregarious Cast Member has worked as a performer for Disney as well as a Resort leader and now works in Food and Beverage — when he’s not treating Disney Guests or his fellow Cast Members to his musical talents!

The popular animated Disney movie Lilo & Stitch was based in Hawaii and recently celebrated its 20th anniversary, and Kanoa Kawai teamed up with other Cast Members back at Aulani Resort and Spa for a special hula dance that included Stitch himself! Take a look at Kanoa and Stitch’s dance moves in the Instagram video below!

A post shared by Aulani, A Disney Resort & Spa (@disneyaulani)

Apparently, the specific holiday for this event was not actually the 20th anniversary of the animated movie from Hawaii. Instead, it was a reference to June 26, which coincides with the alien Stitch’s status as Experiment 626 in the Disney movie.

“It’s June 26 which can only mean one thing, it’s time to celebrate everyone’s favorite trouble-making space invader: Experiment 626, Stitch! Aloha Stitch and happy #626Day!” Aulani Resort said in the Instagram post shown above. Lilo & Stitch was also being celebrated on June 26 with a special evening screening of the movie that was hosted by D23 (the Official Disney Fan Club) in California!

Did you attend the special movie screening with your ‘ohana’, or see the performance during a Disney vacation at Aulani Resort and Spa? Are you a big fan of Lilo & Stitch?