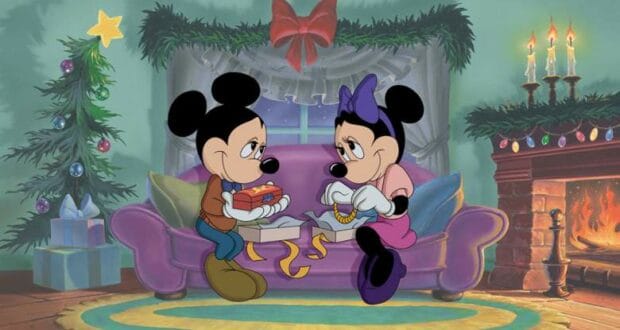 The most joyful time of the year is right around the corner and Disney embraces it with open arms! Besides spending the holidays at Walt Disney World, watching Disney movies is a wonderful way to get into the spirit. Today we’ll discuss eight “must-see” flicks that are perfect for evenings of family time, crackling fireplaces, and mugs of hot chocolate. Pop those sugar cookies in the oven and take notes. You don’t want to miss a single one!

Clocking in at under thirty minutes, this short but sweet special is a cinematic appetizer for your marathon. Mickey’s Christmas Carol follows the journey of miserly Scrooge McDuck, as he is visited by three ghostly spirits on Christmas Eve.Surrounded by a cast of Disney characters, Scrooge finds redemption thanks to the everlasting hope and love of Christmas. Not only is this abbreviated version a great way to introduce kids to the classic Charles Dickens tale, it is also equally entertaining for adults. Don’t let your family miss out on this heart warmer of a special!

Speaking of Dickens, this project between Disney and the Jim Henson company is nothing short of a masterpiece. Spearheaded by Michael Caine as Ebenezer Scrooge, this iteration blends human and Muppet actors in a charming and believable fashion. Similar to the aforementioned version, familiar A Christmas Carol characters are re-cast with Muppets. (Kermit, Gonzo, Sam Eagle, and Miss Piggy are just a few of the all-stars.) Additionally, The Muppet Christmas Carol features original songs that have left fans humming for decades. This film is simply delightful and well-balanced. It manages to capture the ominous feel of the novel while interjecting Muppet levity for the kids. It is a respectable classic.

A staple in many homes, Tim Allen’s The Santa Clause is a beloved twist on the Santa origin story. When Scott Calvin, a less-than-engaged father, spends Christmas Eve with his young son Charlie, he finds himself inadvertently thrown into the role of Santa Claus. Scott convinces himself that night was a dream, but starts to fear he’s losing his mind when he starts to look and act like jolly St. Nick. To make matters worse, his ex-wife and her husband also think he’s losing his mind. In the end, Scott’s love for his faithful son and his determination to become a better man resolve everything. This is a tender-hearted film that is full of hope, humor, and an enchanting version of the North Pole. For everyone who remembers the magic of believing in Santa Claus, this is the movie for you.

While most sequels sin by rehashing the same plot points, The Santa Clause 2 is a clever expansion of the original story. Taking place roughly a decade later, Scott discovers he is contractually obligated to marry. If he can’t find a Mrs. Clause by Christmas Eve, he has to forfeit his job as Santa. As a man who absolutely adores his new life, he chooses to quickly reenter the dating world. Meanwhile, his perfect son, Charlie, is having a rebellious teenage phase. Fortunately, the principle disciplining him happens to be a beautiful, single woman. Sparks fly, but some chaos ensues as well. And of course, Christmas has to be saved. There are so many ways that this film enlarges the original. With more laughs, more heart, and higher stakes – The Santa Clause 2 is near-perfect holiday sequel.

5. Mickey’s Once Upon a Christmas

Diving back into the world of Mickey and his friends, Mickey’s Once Upon a Christmas is a holiday tradition that must be enjoyed on a snowy night beside a lighted tree. This film consists of three heart-melting stories. In story one, Donald’s nephews wish for Christmas to happen every day and find themselves in a Groundhog Day-type cycle. While it is a slap-stick, comedic sequence – it teaches the three mischievous boys the true meaning of Christmas. Story two features Goofy and his son Max (at roughly 8 – 9 years old). The father and son bond as Goofy tries to teach Max goodwill to others and the joy of believing in Santa Claus. And the last tale is an exceptionally darling re-telling of The Gift of the Magi. True to its origin, the young lovers (played by Mickey and Minnie) give up their most treasured possessions to give each other presents. Each segment is genuine, never pandering, and never fails to charm viewers. If this hasn’t made it to your collection yet, it deserves a spot.

Unfortunately, this Disney short film drew a lot of criticism when it first premiered. With a twenty-two-minute runtime, it surpassed the length of a typical pre-Disney film. However; if you can see past the poor planning, this is a gorgeous special. It’s beautifully animated, has the original voice cast, and features more songs from the composers of Frozen. (And these songs truly capture the spirit of the Frozen score while flexing a festive twist.) Regarding the story, Olaf goes­­ on a hunt to learn about all kinds of holiday traditions to introduce to Elsa and Anna. They sadly don’t have many Christmas memories due to their estranged childhood. Olaf goes a little overboard, but in the end, Elsa and Anna enjoy the holiday by just embracing their rekindled relationship. Ignore the Frozen critics and enjoy this special and its incredibly sweet message. It will make you want to give warm hugs.

This is technically an honorable mention (and not owned by Disney), but it’s so heartbreakingly cute, it deserves a place on the list. For fans of the Muppets, this is another Jim Henson creation that features your favorite puppetry and family values. In this feature, we follow the journey of Emmet Otter and his recently widowed mother. They struggle to make ends meet, but have enough love and heart to remain content. However; when Emmet and his mother realize they don’t have enough money to buy each other Christmas presents, they follow another The Gift of the Magi path. Unbeknownst to each other, they enter a local talent competition with a large cash prize. The problem is, they both have to sacrifice beloved dreams to enter the contest. All in all, this film is a hidden gem. The ending is satisfying, despite a dose of realism. The soundtrack is adorable. And the entire production has that Jim Henson sincerity. Peruse the internet for a local copy and enjoy a new tradition!

8. The Nightmare Before Christmas

Yes, we have saved the best for last. Tim Burton’s stop-motion masterpiece The Nightmare Before Christmas boasts a cult following and makes every Rankin Bass production look sub-par. (Also, few movies are appropriate for two holidays.) This tale follows the journey of Jack Skellington, the pumpkin king of Halloweentown. Stuck in a slump with his life’s purpose, Jack stumbles upon Christmastown – a glittering, magical world he never knew existed. Enchanted by the most magical holiday, Jack becomes obsessed with recreating Christmas for his subjects. Unfortunately, he goes too far and even tries to replace Santa. This unique adventure is ominous, delightful, and endearing all at once. After all, there’s a reason it becomes more popular every year. It’s positively Spooktacular.

When it comes to holiday cheer, Disney simply knocks it out of the park. So, no matter how you’re spending Christmas, know that you can always curl up on the couch and enjoy this magical marathon. Happy binging!