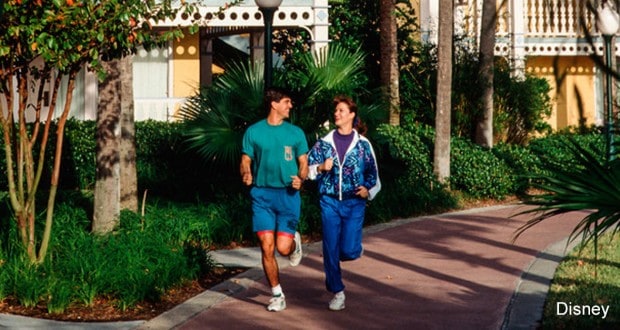 For some of us, while on a Disney vacation, the only action our running sneakers get are the miles upon miles of earth we tread while at the theme parks (and what a workout that alone is!). Others, however, lace those bad boys up and pound the pavement to some of the most extraordinarily scenic trails we could imagine. Disney likes to make everything a magical experience and spending time on these paths during your stay is no exception. From the impeccable landscaping to the pleasant aromas of the blooming flora or wafting from the nearby eateries there are countless ways to enjoy what can be considered a complete sensory experience. And whether you are staying at a value, moderate or deluxe Disney World Resort, each one is equipped with a path that can serve as a perfect place to take a leisurely stroll with your family or spend some quiet time alone before an action-packed day at the parks. Next time you are even considering getting some early morning exercising in, dodge that treadmill and opt for an experience that incorporates all of your senses into this wondrous endorphin-releasing activity, guaranteed to help ensure you have fun on your run! While they are all pretty cool in their own right, here is a list of some of my favorite Walt Disney World Resort jogging trails.

Please Note: You can get a mapped brochure of the jogging trail at the front desk of your resort upon asking (some even come in the information packet you automatically receive while checking in!). Also, the best time of day to enjoy your run/walk is in the early morning hours before the pathways become heavily congested with people/bicycles/surreys/etc.

This widely-spaced paved path looping around Lago Dorado (“Golden Lake”) closes its circle at 3/4 of a mile or you can complete a full mile if you take the brief excursions that have you moving past Ranchos and Cabanas. Each building you pass by reflects the American Colonial Spanish and Southwestern themed flair with its intricately detailed and eclectic design. In addition to the buildings you pass, your eyes get to experience the beauty of the shimmering lake, located smack dab in the center of this delightful resort. Cons: This pathway offers no shade to shield you from Florida’s unrelenting sun so get your sunscreen ready!

If you accidentally “carbo-loaded” on too many waffle sandwiches or funnel cakes from the Sleepy Hollow’s refreshment stand in the Magic Kingdom, no worries, you can log in a quick 1.5 miles at the resort located right next to this theme park the next day. Take the pathway that leads towards the Magic Kingdom, stay on the brick walkway, and continue past the boat launches just to the left of the monorail station. The trail that resides right next to the Seven Seas Lagoon will end shortly thereafter so just about-face and follow your way back to the resort. Don’t forget to take in the sights, sounds and smells of the Magic Kingdom’s main entrance area. Catch a whiff of freshly popped, buttery popcorn, watch the boats and ferries docking or the monorails whiz by above you, listen to the legendary steam train’s iconic whistle. Check out the fading bricks of the discontinued personalized stones leading up to Magic Kingdom as your sneakers move over them. All these experiences and more are for the taking! Cons: This walkway also becomes congested (as does the entrance to the Magic Kingdom) as the day goes on so make it an early (or late) jog.

This tropically scenic path gives you approximately 1.2 miles around the resorts beautiful Barefoot Bay Lake. The island-feel and vividly colorful buildings will inspire a laid-back stroll or a peaceful jog, mon. Watch for the exotic birds around these resort grounds, they are a sight to see! Cons: If you don’t set out early enough, you will be sharing these paths with many other islanders.

I’m grouping these together because this amazing, rustic jogging trail has a wooded path that connects these two Disney resorts. These trails are often populated with bikers, pedestrians and running enthusiasts, not to mention the varied wildlife that make the nearby wilderness forests their home. There have been very few times that I have run this path and NOT encountered bunnies, raccoons, turtles and DEER (yes, Bambi and his friends frolic amongst us here!) as well as numerous species of birds and the occasional possum or two. The Wilderness Lodge Resort begins its running trail by the bike rental near the beach and has you follow the path that winds behind the Vacation Club Villas, intersecting with the fitness trail/jogging path that leads to Fort Wilderness. Jogging around Fort Wilderness is certainly a treat as you can easily snake your way in and out of the numerous campground loops—don’t forget to take a deep lungful of that delicious bacon-infused air around you as the campers cook their breakfast on the outside grills—and appreciate the often cute and sometimes kitschy decorated RV’s and tents. The marked jogging path on the brochure you will receive at the Fort Wilderness Campground indicates a 2.5 mile trail that can easily be shortened or added to for the long-winded runner. Cons: The pathway that connects these two resorts is not lit which makes REALLY early morning (or late night) jogging next to impossible. Also, during Florida’s warmer seasons (which are pretty much all the time) and because of the surrounding wetlands there are mosquitos and gnats, so giving your body a quick insect-repellant spray down before you head out might be in your best interest.

Made up of two sections, The French Quarter and Riverside, this picturesque Louisiana themed hotel has a tranquil path that takes you past the Sassagoula River on a 1.7 designated mile track. You will encounter gorgeous landscaping, bubbling fountains, a large water wheel, southern plantation home-style buildings and perhaps even a horse as it trollops by, drawing its carriage. I simply love the “feel” of this New Orleans resort, an idyllic oasis that captures the true charm of the antebellum south. Cons: In addition to the horse-drawn carriages, you also share the path with pedestrians, bikers, and surreys so keep on the alert!

Again, though you can keep your run limited to the confines of the one resort, my preference is to go along the path that joins these resorts together. At the Polynesian Resort you will have the opportunity to appreciate all the luscious tropical vegetation that surrounds the course as well as the distinctive Hawaiian character and as you head past the Fiji and Aotearoa buildings, your feet will follow a brick path that will lead you toward the Grand Floridian’s Wedding Pavilion. Listen to the lapping waves of the Seven Seas Lagoon located alongside this route and watch the monorails overhead make their daily rounds through the Magic Kingdom area resorts. The 1-mile course will take you to the Grand Floridian Resort where you can either double back or jog along the various paths on this resort’s grounds. Don’t forget to catch that breathtaking glimpse of Cinderella’s Castle along the promenade and be sure to treat yourself to a Dole Whip or Tonga Toast at the Polynesian Resort when you’re done! Cons: The only con for me is that there is little shade along this route (so, again, go early!).

Though this deluxe vacation club villa resort boasts one of the largest and most impressive gyms, the jogging path that surrounds this resort is an experience you won’t want to miss! Saratoga Springs is a beautifully designed creation modeling a Victorian-era upstate New York lakeside retreat with lush fairways, formal gardens, fountains and springs and a stellar view of Downtown Disney (soon to be renamed “Disney Springs,”) located just across Village Lake. Your mileage can easily be increased beyond the two jogging trail options they give you (the longest one listed at 1.44 miles). What is so neat about this resort is that it has a path that connects to The Treehouse Villas, Disney’s Old Key West Resort and Downtown Disney, giving you seemingly limitless routes. Or you can simply stay on the grounds and weave your way through the building loops and various lakes. Keep your eyes up and you’ll be sure to catch the Characters in Flight balloon which hovers at 400 feet in the sky just next door at Downtown Disney. Cons: The resort is a golfer’s paradise so you always have to keep your eyes peeled for the golf carts. Though they are marked by signs, it’s also easy to get confused as to which paths belong solely to the golfers (especially when you are in that “runner’s zone”). True story: I accidentally found myself running on one of these “forbidden” zones and was swiftly picked up by a cast member in a golf cart, eager to bring me back to one of the pedestrian trails. My initial embarrassment quickly subsided, however, as we chatted about our hometowns. So don’t fear…even Disney “scoldings” are friendly.

These Epcot area resorts get a grouping as well because of the path that connects them all. The mapped brochure gives you four separate jogging trail options (one taking you on the “outskirts” of the resort to the sidewalks lining the street). Easily my favorite jogging path is the one that loops around Crescent Lake, the body of water that rests between The Boardwalk and The Yacht and Beach Club. There are few things as satisfying as jogging past the Boardwalk Bakery and breathing in all that freshly baked goodness first thing in the morning. Follow the trail past the Boardwalk to the sidewalk lining the canal that leads to Disney’s Hollywood Studios. If you start your jog early enough you can find yourself on the empty and ghost-town like main entrance area of Hollywood Studios before they open, an experience like no other. Take off your earphones and listen to the epic Hollywood anthems pumping from the theme park’s speakers, seemingly just for you! Whether it’s the Superman theme or Chariots of Fire, this music will give you that extra boost to achieving a runner’s high like no other! There are so many routes to choose from, but the Crescent Lake loop alone is at .8 miles. Run/walk as many circles around the lake as you’d like, or venture off to another exciting pathway. Cons: These passageways become very heavily populated throughout the day as they lead to two major theme parks (Epcot and Hollywood Studios) not to mention there are runaway surreys everywhere you turn (maybe an exaggeration, but something to note nonetheless).