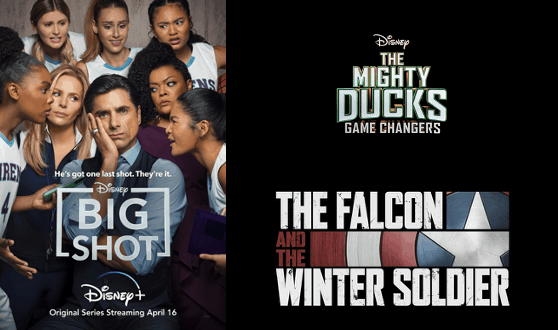 “Big Shot” and More Added to Disney+ This Week

It is a new week which means new movies, shows and episodes are added to Disney+. Take a look at some of the top additions this week and get ready to watch!

The newest show to be added to Disney+ this week is the Disney Original “Big Shot”. This show features John Stamos as a girls basketball coach for at a private school. Coming from the NCAA world, he has to adjust his coaching style to fit the needs to these young players.

The Falcon And The Winter Soldier – Episode 5

Also coming this week is a new episode for The Falcon and the Winter Soldier. As the story gets closer to wrapping up, there is still a lot of unknowns we are waiting to learn more about.

This new original show based off of The Mighty Ducks has really taken off. We love the storyline and seeing how these kids work together as a team to better themselves and the overall team.

Another new addition to Disney+ this week is Earth Moods. This show takes viewers on the ultimate retreat—transporting them to a vast array of colorful and calming corners of the world. Viewers travel to blue glaciers, arid deserts, lush rainforests and pulsating metropolises to escape from the cacophony of everyday life. Each “mood” gives the audience an opportunity to relax and reset as the sound of music and the natural world washes over them.

The King Who Would Be King

These are just the highlights of what has been added to Disney+. What are you the most excited about?