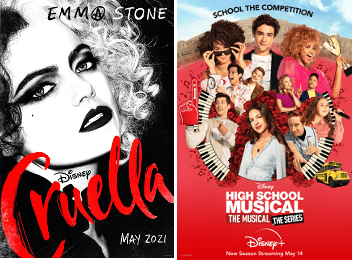 Big Week For Disney+ As New Content Is Added

This last week of May will be a big one for Disney+ as 10 new titles will be added including a combination of new episodes and new movies. Take a look at what is coming and then get ready to watch!

Here is an overview of what is coming:

-Kingdom of the Polar Bears (S1)

The most anticipated addition will be the release of Cruella to Disney+ through Premier Access. We are thrilled to see Emma Stone and what she will bring to this villain.

Many new Disney+ Original series will be amping up this week as The Mighty Ducks: Game Changers wraps up and High School Musical: The Musical: The Series, Star Wars: The Bad Batch and new episodes and the first look at Launchpad.

What are you excited to see this week on Disney+? Will you be watching Cruella?