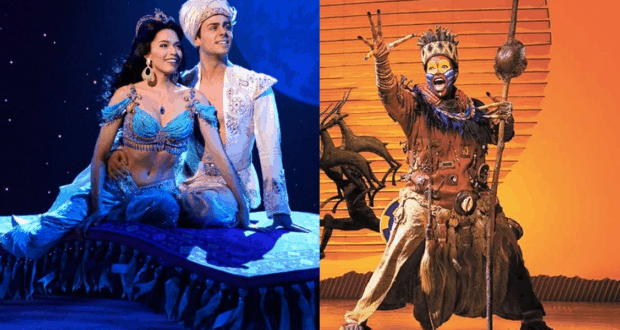 Broadway Casting Announced for Returns of ‘Aladdin’ and ‘The Lion King’

The theater industry has been hit extremely hard during the pandemic as without live audiences, live theater can’t happen. We are so excited that it has been reported that Broadway will begin reopening this fall. With this news, Disney Theatrical Productions has now announced the full cast for the both Aladdin and The Lion King.

The Lion King will return first at the Minskoff Theatre on September 14. The cast is led by Brandon A. McCall as Simba, who previously played the role in the North American Tour. The production will also feature  Stephen Carlile as Scar, L. Steven Taylor as Mufasa, Tshidi Manye as Rafiki, Cameron Pow as Zazu, Ben Jeffrey as Pumbaa, Fred Berman as Timon, Adrienne Walker as Nala, James Brown-Orleans as Banzai, Bonita J. Hamilton as Shenzi, and Robb Sapp as Ed. Vince Ermita and Corey J. will alternate as Young Simba, with Alayna Martus and Sydney Elise Russell alternating as Young Nala.

Aladdin will open at the New Amsterdam Theatre on September 28. The production will be headed by Michael Maliakel in his Broadway debut as the title role, after touring in the 25th anniversary production of The Phantom of the Opera. Shoba Narayan will feature as Jasmine, who previously performed on Broadway in Natasha, Pierre & the Great Comet of 1812 and Wicked. Other cast members include Zach Bencal as Babkak, Michael James Scott as Genie, Jonathan Freeman reprising his original role as Jafar, Don Darryl Rivera as Iago, Milo Alosi as Kassim, Brad Weinstock as Omar, JC Montgomery as Sultan.

We are thrilled to have theater back and can’t wait to see these performers doing what they love once again.