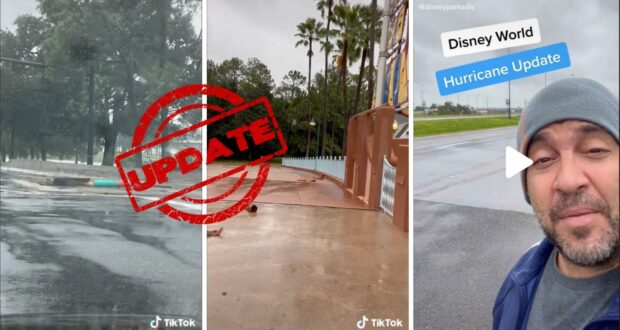 After Hurricane Ian barreled down on Florida on Thursday, the storm’s impact has slowly been coming to light, including in Disney World.

Now that Hurricane Ian is officially clear of Central Florida, the hurricane and tropical storm warnings were lifted for areas like Orange County. After a multi-day closure, Walt Disney World Resort, Universal Orlando Resort, and Orlando International Airport having announced their phased reopens, continue to assess the damage they had to deal with in the aftermath of the massive, slow-moving storm and look forward to the next steps.

Earlier, we at Disney Fanatic reported on the damage sustained by Disney’s Contemporary Resort due to Hurricane Ian, as reported by Go Orlando Go.

Now, more accounts and documenting of the damage accrued at the Disney Resort are coming to light, including this video from TikToker Disney Parks Live, @disneyparksdiy.

Check it out below:

Related: Disney World Could Be Losing Millions Per Day Due To Hurricane Ian

In the video, Disney Parks Live host Royce takes viewers through the Boardwalk Resort area and surveys the impact of the previous day’s rain and storms.

Other users and Disney Guests took the chance to share the damage (or lack any severe kind thereof) in comments on the footage from Disney Parks Live.

TikTok user, Bekah Weider, commented, “No severe damage over at Caribbean Beach either. Some down foliage and a broken light or two, but otherwise ok.” A housekeeper at Yacht and Beach Club, Amber Khounsavatdy, also corroborated she did not see much damage on that property either.

Overall, Guests were all glad that the property was largely intact and that the Guests appeared to be safe and well. Many also reported being hopeful to return to the Walt Disney World Resort—the Magic Kingdom, Disney’s Hollywood Studios, Disney’s Animal Kingdom and EPCOT.

As Disney Parks Live said in his caption, “Things are looking calm here in the aftermath.”