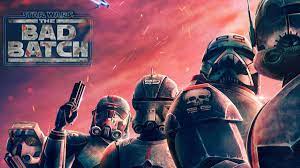 Celebrate Star Wars With All New Shows on Disney+

May the 4th is known as Star Wars Day and Disney+ has taken full advantage of it by adding a variety of different shows to their line-up that feature Star Wars. Take a look and then head to Disney+!

The biggest addition this week is the release of the new show Star Wars: The Bad Batch. This new series will follow a group of experimental clone troopers as they adjust to the galaxy following the end of the Clone Wars.

For something a little more humorous, check out “Maggie Simpson in ‘The Force Awakens From Its Nap’” where Maggie searches for her stolen pacifier.

“Star Wars Biomes” will take viewers on a virtual vacation through some of Star Wars’ most famous and beloved locations. Travel through Hoth, Tatooine, and Sorgan in this series that takes us to a galaxy far, far away.

“Star Wars Vehicle Flythroughs” take guests on an exploration of the Millennium Falcon and an Imperial Star Destroyer.

These are just the new releases today, but you can catch many other Star Wars shows on Disney+ today. What will you be watching?