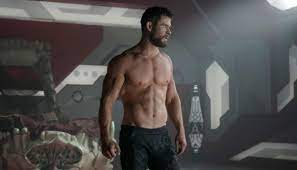 Chris Hemsworth Is Strongest Yet for Thor: Love and Thunder

Chris Hemsworth has always been fit and looking like the God of Thunder he represents, but the actor seems to have managed to be even more god-like for the upcoming Thor: Love and Thunder.

During a recent interview with The Telegraph, the Hemsworth revealed that thanks to the COVID-19 pandemic and the ongoing quarantine, he was able to become the “fittest and strongest” he’s ever been for a Marvel movie by experimenting with different approaches at home.

“This is probably the fittest and strongest I’ve been before all the Thors. Having this time at home meant I explored different methods, to see how I can manipulate my body with just the right amount of powerlifting and bodybuilding workouts,” he claimed.

The actor further noted that he’s been training for Thor ever since the first film in 2011, but admitted that he “probably overtrained” for those earlier ventures, saying:

“For years I probably overtrained. People who do muscle-building often don’t realize it’s a sport that shouldn’t be seven days a week, two hours a day. I was doing that in the previous Thors, and was coming up sorer, with less energy.”

We look forward to seeing Thor: Love and Thunder for more than one reason!