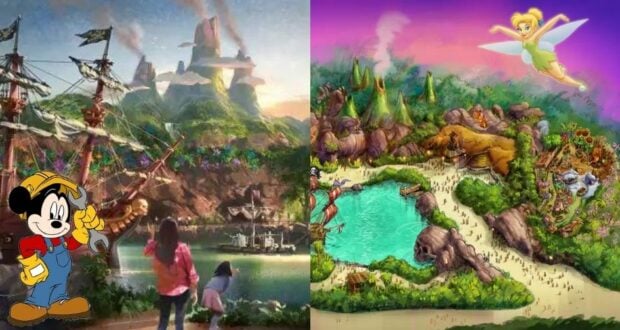 It is considered by many Disney Fanatics to be the best Disney Park in the world, and it is about to get even better.

At the 2022 D23 Expo, it was announced that Tokyo Disney Resort was going to get an eighth themed land where Guests will be immersed in the worlds of Peter Pan, Frozen, and Tangled. Today, more official details have been revealed. According to Disney Parks Blog, the new land–or “Port” as they call it at Tokyo DisneySea–will feature three new areas that will include “Peter Pan’s Never Land,” “Frozen Kingdom,” and “Rapunzel’s Forest,” as well as a brand new hotel called Tokyo DisneySea Fantasy Springs Hotel.

Frozen Kingdom will be the third permanent Park addition to be given to Queen Anna, Princess Elsa, Olaf, and the rest of Walt Disney Animation’s latest “princess” franchise, following the ones already under construction at Hong Kong Disneyland and Disneyland Paris Resort. The land will include Arendelle’s Castle and village, along with Elsa’s snow-covered Ice Palace off in the distance. Rapunzel’s Forest is just as it is named. Disney Parks states, “Practically a dream, you’ll soon be able to experience “Tangled” as it comes to life in Rapunzel’s Forest. Rising from the ground, the tower where Rapunzel lived as a child will overlook this new area. At night, it will illuminate the surrounding forest in addition to lamps lining the paths, a glowing restaurant and boathouse windows with lanterns hanging from the boats.” Peter Pan’s Never Land will finally give Disney Fanatics the chance to visit the place where kids never grow up. Disney Parks calls would-be Guests to “With just a little bit of pixie dust, join the ranks of the Lost Kids, explore a pirate ship, dine in a secret hideaway, confront pirates or visit Pixie Hollow, the fairy valley where Tinker Bell lives.” Finally, the Fantasy Springs Hotel will be Tokyo Disney Resort’s sixth Disney hotel. According to Disney Parks, “it is situated near Fantasy Springs and allows this dream world to continue from the park to the hotel. It will feature paintings depicting Disney Princesses as well as floral motifs throughout the interior of the hotel.” These latest additions to Tokyo DisneySea are scheduled to open in the Spring of 2024.

Tokyo Disneyland and Tokyo DisneySea, and the rest of the Tokyo Disney Resort is independently owned and operated by the Oriental Land Company.