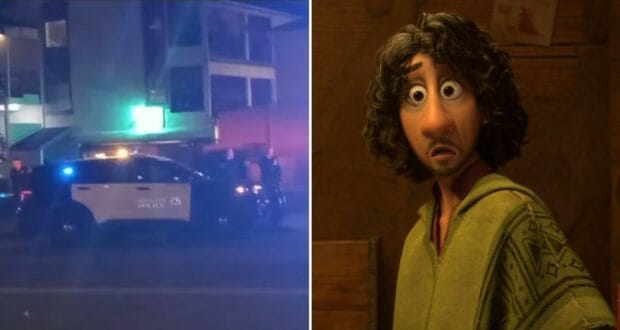 It is no secret that The Walt Disney Company is very protective over its IPs–especially when someone else is making money off of them. Earlier this week, for example, we shared a story about one TikTok user being sued by Disney over his Lightning McQueen-themed Subaru BRZ.

Disney’s active copyright enforcement is often antagonized as an inhibiting force–especially on YouTube. But it appears, in this case, it came in handy for a couple of cops trying to solve some cases and dispense some justice.

It was around 11:00 pm in Santa Ana, California. Police were on hand investigating a stolen vehicle case when a YouTuber decided to show up and film the scene. Rather than attempt to shoo the independent journalist away from the scene, the cops decided to blast Disney Music from one of their cruisers instead.

According to a local ABC affiliate, the Santa Ana Police officers’ playlist began with “You Got a Friend in Me” from Disney/Pixar’s Toy Story, followed by Encanto’s “We Don’t Talk About Bruno,” Coco’s “Un Poco Loco,” and others. Again, the incident occurred just before midnight, and music–which had to be loud enough to be picked up by the bystander recording across the street–began to wake up neighbors. When asked why they were playing the music so loud, one officer simply replied, “Because they [the YouTubers] get copyright infringement.”

Still, the YouTuber uploaded the antagonizing video of the incident, which you can see below:

It appears that this is not an isolated incident. While video recordings of crime scenes–so long as they do not directly interfere with the investigation–are protected under the first amendment, cops have started playing Disney music in order to prevent bystanders’ footage from spreading across the internet.

“YouTube has bots that go around, and they match the song they’re hearing, and then if that’s on YouTube and it wasn’t cleared, then the music, the song recording, and the copyright, they get taken down, and then the person [who] posted it, who is trying to be a good citizen to say, ‘Watch what this cop did or cops, they should be prosecuted,’ that person now gets a copyright strike,” said Dr. E. Michael Harrington, professor of music and copyright at Berklee Online.

Harrington also clarified that content creators could be fined $750 to $150,000 for copyright infringement as well as risk being banned from social media platforms. Chief of Police David Valentin addressed the incident, saying, “My expectation is that all police department employees perform their duties with dignity and respect in the community we are hired to serve.”

One of the officers involved appeared to apologize directly to the Chief, and it is unclear if any reprimands will be dispensed.