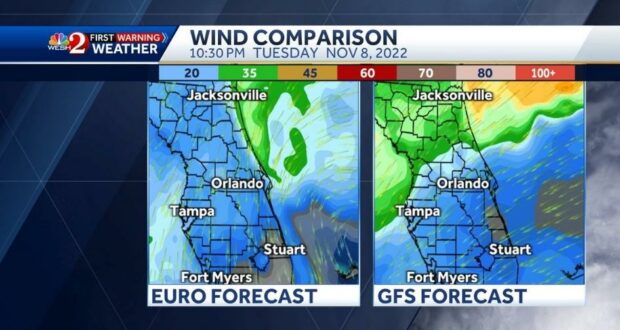 Hurricane Season does not end until November 30, and it appears that the storms are making the most of the time they have left.

This week, the National Hurricane Center (NHC) and local news stations began monitoring a situation off of Puerto Rico and The Bahamas that could be the birth site of the latest tropical storm to impact The Caribbean and even Florida.

“A non-tropical area of low pressure is expected to develop this weekend in the southwest Atlantic. Some sub-tropical, or even tropical, development is possible as it moves north-northwest. It’s too early to tell what it will do. … Significant development is not expected with this low, but it’s predicted to bring windy conditions, rain showers and storms into Central Florida by Tuesday that may last as long as Thursday.”

A broad area of low pressure is expected to form late this weekend and early next week and may track towards Florida. Nothing major is expected to develop but we will be watching it for wind, rain and coastal concerns beginning next week. Stay with @WESH for updates. #weshwx pic.twitter.com/wEr5PRt2iW

The NHC gives this low-pressure system a 30% chance to develop within the next five days, suggesting that residents and visitors of The Sunshine State could face little more than windy and rainy days. But it is still too soon to know more specific details, especially how it will affect The Walt Disney World Resort’s Theme Parks and Resort Hotels.

It should also be mentioned that Disney Cruise Line has not made any public announcements regarding any changes to their upcoming itineraries out of Miami or Port Canaveral at the time of this article’s publication.

Things are going to be rough at the beaches these next few days my friends;

Wind is likely to pick up next week as a weak area of low pressure heads our way. We will be monitoring our wind potential and high tides as coastal beach erosion may become an issue. Stay with @WESH for updates. #weshwx pic.twitter.com/LwaeLYOBru

We at Disney Fanatic will continue to monitor this story, and we will update our readers as more information comes to light. At this time, we advise all would-be Guests of The Walt Disney World Resort to be prepared to experience the magic through some stormy weather.