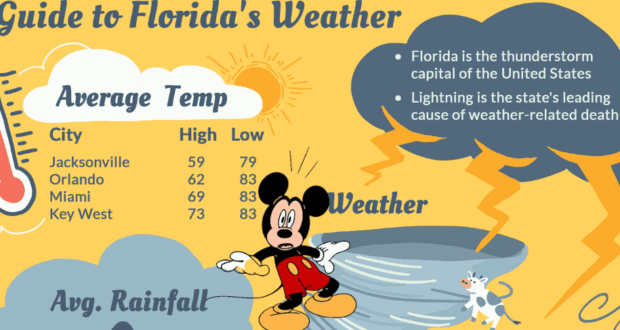 The Craziest Weather to Ever Hit Disney World

Things aren’t always so sunny in the Sunshine State. In fact, Florida is known for such an extreme variation in weather patterns, and some can even be counted as downright sinister. That means Walt Disney World weather is by no means all about pixie dust and magic, despite all the well-known connotations. And a Walt Disney World vacation comes with its fair share of possibilities.

Let the records show that Disney World has been the hotspot for some pretty severe weather over the years. From hurricanes and hailstorms to damaging floods and even lightning strikes, we’re looking back at some of the craziest and most extreme weather to ever hit Walt Disney World Resort.

We all like to think of central Florida as having perpetually hot weather throughout the year. But truth be told, even Disney World and the greater Orlando area have been known to experience temperature dips. Strange but true, the most shockingly low temperature ever recorded in the area fell to just 19 degrees Fahrenheit (17 in some places). That was back in January of 1985.

On the flip side, the hottest recorded temperature at Disney World reached a muggy 102 degrees back in July of 1998. This is just one degree shy of the historical high of 103 degrees that the National Weather Service recorded back in 1921, predating Disney’s presence in Florida. If you’re wondering what 100+ degrees feels like in Florida with all that humidity, just add on 30 degrees. So, low and behold, the hottest day Disney Guests ever experienced felt like it was 132 degrees! Hurricanes and tropical storms are among the most blatant weather threats to Walt Disney World Parks and Resorts. According to NOAA, the average number of storms produced during the Atlantic Hurricane Season has recently increased and now stands at about 14 named storms, seven of which are classified as full-fledged hurricanes, and up to three that go on to become designated major threats. Hurricane season ranges from the month of June on through November.

Throughout its 50-year history, Disney World has had to close its theme parks due to inclement weather brought on by hurricanes on eight separate occasions. The first instance was when Hurricane Floyd decided to wreak havoc back in 1999. Five years later, and in came Hurricane Charlie in 2004, leading a procession of two other storm fronts that same year—Hurricane Francis and Hurricane Jeanne. Next, came Hurricane Mathew in 2016, followed by what has been deemed the most damaging of all hurricanes to hit Disney World Parks—Hurricane Irma in 2017. The most recent hurricane to result in Park closure was Hurricane Dorian in 2019. 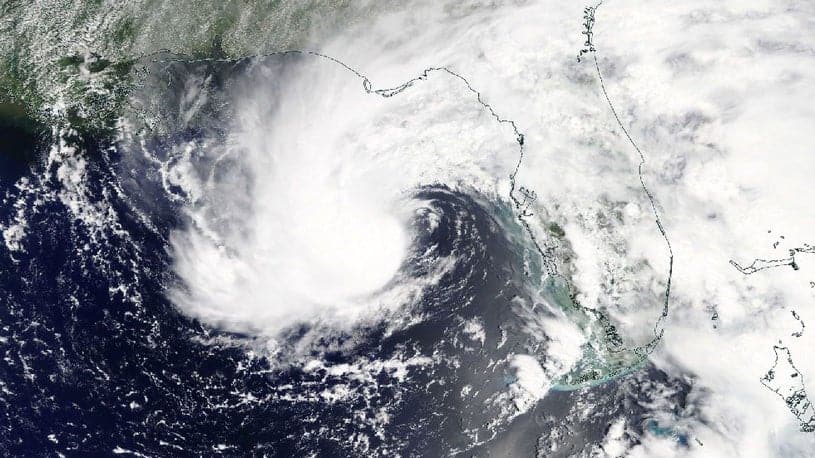 Related: 6 Things You Should Know About Your Disney World Vacation When A Hurricane Is On The Way

According to the National Weather Service, the average annual rainfall in Disney World measures just below 50 inches, with the instance for rainfall estimated at around 84 days out of the year. July is deemed the rainiest month, with around 7.6 inches of accumulation during this time alone.

Flooding is nothing new at Disney World, but we can’t ignore the fact that recently there have been even more frequent mass incidences of Disney World Park inundation due to rain. In fact, according to the Environmental Protection Agency, rainfall throughout the state has increased by nearly 30% since the late 1950s. 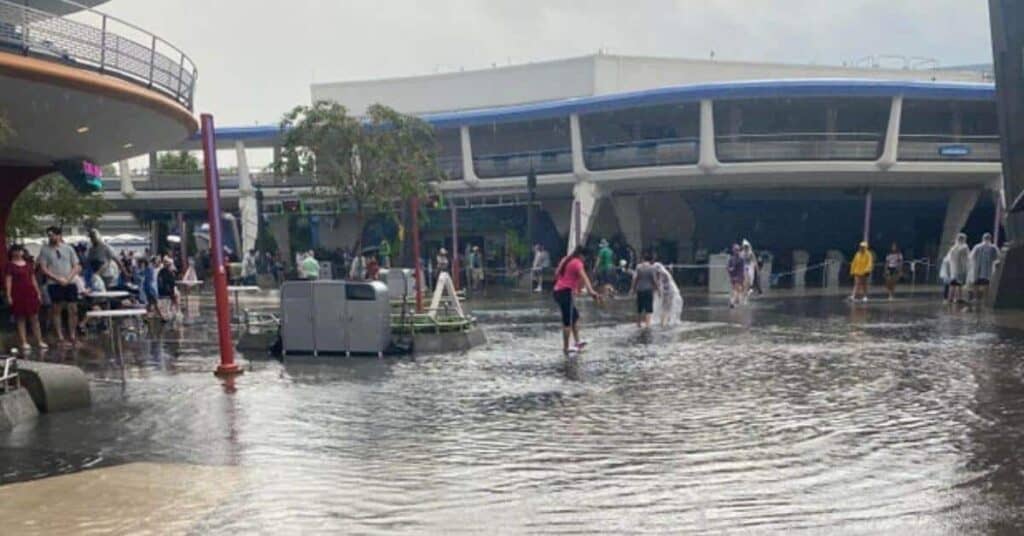 While extreme rain is a far more frequent occurrence, Disney World is no stranger to hailstorms either. In fact, the state of Florida has a designated hail season that ranges between the months of March and July, with May being the peak time. According to the National Weather Service in Melbourne, the state has documented 300 known hail events in just the past decade alone. Hailstone sizes in Florida can be as small as half an inch to up to a quarter large. The largest one ever reported in Florida history measured 4.5 inches. Disney has laid to rest the incorrect notion that lightning never strikes twice. As the record shows, multiple landmarks and attractions have been hit throughout the Parks, some repeatedly.

According to Click Orlando, Central Florida actually leads the United States in having the most lightning strikes, and the zone in which Disney World is located sees around 56 lightning strikes every square mile per year. About 90 percent of these strikes take place between the months of May and October.

The lineup of notable icons on Disney World property to have been struck by lightning include, but are not limited to: Splash Mountain, Spaceship Earth, Cinderella Castle, and, ironically enough, the Twilight Zone Tower of Terror. On July 13, 2014, there was even a power failure in connection to a lightning strike that temporarily halted Walt Disney World Monorail operations. While most of the cars were able to be restarted and returned to their stations, one in particular—Monorail Gold—was rendered inoperable for the time. Therefore, all 120 passengers had to be evacuated by Reedy Creek emergency personnel. 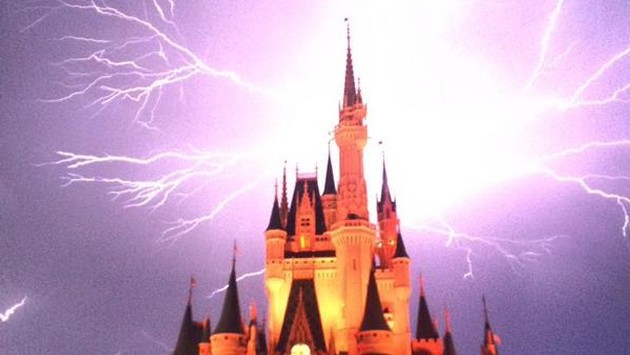 While there has never actually been an official full-blown tornado rip through any section of Walt Disney World Resort property, there have been quite a few tornadoes touch down pretty close by. Back in February of 1998, nearby Kissimmee saw a series of 15 tornado occurrences termed a “tornado outbreak” resulting in 259 injuries, 42 known fatalities, and over a million dollars in destruction.

According to NOAA, it’s estimated that around 60 tornadoes plow through Florida every year. What’s more, there are actually two tornado seasons here rather than one. The summer tornado season spans between June and September, while the late-winter/early spring season occurs between February and April. 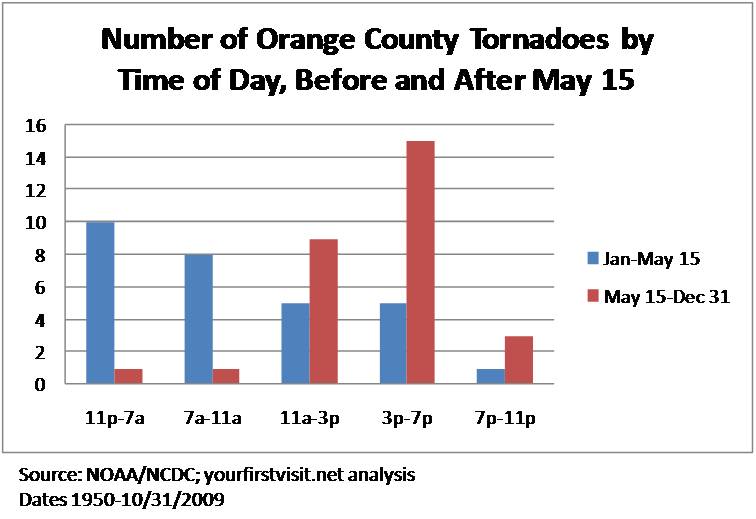 Disney has been spared any direct impactful tornado occurrences to date, thankfully. However, there have been several documented instances of menacing-looking funnel clouds forming in the skies just about the Parks. The most recent example for such was the emergence of a sinister scud cloud in the EPCOT area on September 15, 2022. While the sight of a scud may appear frighteningly like a tornado, the reality is that these sorts of clouds are relatively harmless. They typically form when cool wet air meets warm air right at the start of a thunderstorm. And because they are so low-hanging, they tend to form a funnel-like shape. Scuds lack the ability to rotate the way tornadoes do. Therefore, they do not have the same velocity or potential to inflict a comparable level of destruction. At the very worse, a scud is precursor to a violent storm, which may result in heavy rains or even lightning strikes. So pay heed to the scud just the same. 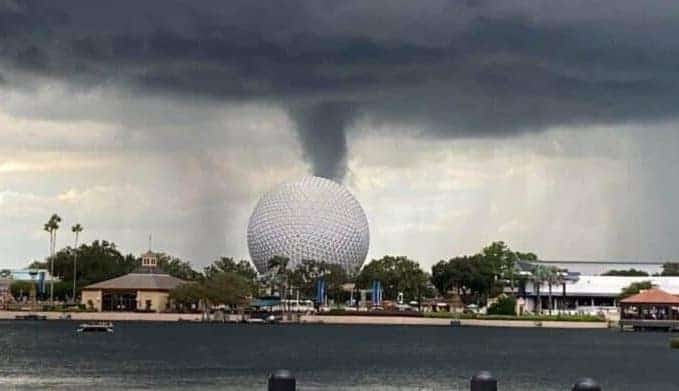 Aside from the “snoap” produced at Disney Parks in light of holiday happenings, snow is largely a very atypical precipitation type you’d expect to see in central Florida. But it should be noted that the improbable is not necessarily impossible. We mentioned previously that the lowest temperature ever recorded at Walt Disney World dipped to as low as 17 degrees Fahrenheit in some places. And that is well below freezing, which in fact, may result in minimal snowfall.

As it turns out, the greater Orlando area has, in fact, been known to report flurries. While extremely rare, one documented instance of snow occurred was back in 1977, just six years after the opening of Walt Disney World Resort. There was no real accumulation at Disney World, but it’s still interesting to note that it has, in fact, happened. Related: Prepare for a Cold Week at Disney World!

You really never can predict the weather forecast in advance to visiting Walt Disney World. With clues for what to expect during a given season assisting somewhat, the reality is that weather patterns in Florida have been known to shift suddenly and unexpectedly more times than not. But you may rest assured in knowing that Disney is forever prepared for the unexpected, especially where weather is concerned, and there are numerous precautions put into place in the event that there are ever any severe weather-related emergencies. From strong winds to power outages, light storms, or something major, Disney has Guests covered.