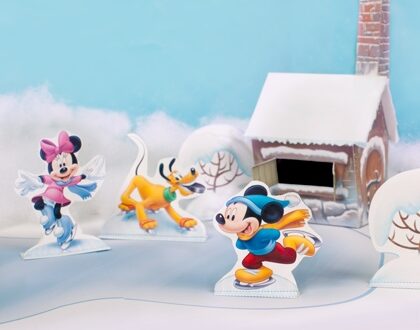 Staying Warm at Disney World When Things Get Cold

While we like to think of the sunny state of Florida as being the ultimate hot weather haven to head to during the winter, you should note that the occasional dip in temperatures does happen here as well. While not as cold as the rest of the country, Florida’s cold fronts can catch vacationers off guard.

Here are eight wonderfully warming suggestions to keep in mind for when things get cold at Disney World.

It’s true that each and every Walt Disney World accommodation boasts onsite swimming pools, but the chill in the air (or lack thereof) can greatly influence your decision on whether you decide to go for that mid-January swim or not. Unless closed for refurbishment or other reasons, all pools are open year-round and are heated to a constant 82-degree temperature Fahrenheit.

So even if the air temperature drops, you’ll see at least a handful of guests gladly swimming on any given day. But if you’re not one for braving the “cold” via a full-fledged swim, perhaps you’ll be more agreeable to a dip in a hot tub set to 104 degrees.

7. Find Warmth in What You Wear

Don’t make the mistake of leaving behind your coat and other warm-weather gear as you embark on a vacation to the Walt Disney World Resort. The good news is that even if you find yourself lacking the needed coats, sweaters or hoodies you can find just what you need at many Disney-based retail venues. In most cases, you need not look any further than your own resort store.

What’s more, you can keep with the fun Disney theme by going this route! But another great option is to head on over to Disney Springs. Not only can you warm up by actively visiting different retail venues, but you can visit a lot of renowned big-name stores, some of which are known for thick and warming apparel and accessories, such as Columbia Sportswear, UNDERARMOUR BRAND HOUSE, UNIQLO, and so many others.

6. Hot Beverages Are in Order

While delightful brews like coffee, hot chocolate, and other concoctions can be enjoyed any time of the year, there’s just something even more warm and comforting about cradling that cup when the weather grows colder. You will find Joffrey’s specialty coffee brews being served up in many places throughout.

Then there are all those Disney-based Starbucks affiliates, like Main Street Bakery in Magic Kingdom Park, Trolley Car Cafe at Disney’s Hollywood Studios, Traveler’s Cafe at EPCOT, and Creature Comforts at Disney’s Animal Kingdom, not to mention Starbucks shops at Disney Springs. Whether you go for the caffeinated good stuff or choose to indulge in something decadent and delicious, like hot chocolate or cider, having a hot beverage in hand on a cooler day or chilly evening may be just the thing to give you the buzz you need.

There are a number of indoor attractions to take delight in all over Disney World. And if the weather is less than ideal, you may want to take note. To start with, there are dark rides galore ranging in everything from gentler, slower-moving classics like “it’s a small world” in the Magic Kingdom to faster, breathtaking thrills, such as Rock ‘n’ Rollercoaster at Hollywood Studios. And we can’t forget about Soarin’ and Spaceship Earth in EPCOT!

Then there are those attractions that aren’t rides per se but succeed effectively at grabbing your attention all the same. Some examples include shows like Walt Disney’s Enchanted Tiki Room, Mickey’s PhilharMagic, Walt Disney’s Carousel of Progress, The American Adventure, It’s Tough to be a Bug!, and so many others. So, not attractions require you to brave the elements—a warming thought indeed!

When considering the aforementioned indoor attractions, we must note that out of all four Disney theme parks, EPCOT appears to be the very best one to head to when the weather isn’t cooperating. Not only do they have numerous indoor attractions to amuse yourself with, but they also boast plenty of venues in general to tuck in and out of while making your rounds. Whether you’re taking a self-guided tour within the World Showcase or you stop off at the Land Pavilion or Living Seas With Nemo & Friends, EPCOT is undoubtedly your best bet for taking a break when the temperature plummets beyond what you had hoped for.

3. Stroll Along the BoardWalk

This quarter-mile promenade near the Disney resort of the same name boasts an array of activities and venues, many of which offer some cover from the cold. Guests looking for indoor pursuits can delight in a vast number of dining options, shopping, watching televised sports, dancing the night away at the Atlantic Dance Hall, and a whole host of other diversions to get lost in.

Related: 10 Reasons Why You Should Spend a Few Hours at Disney’s Boardwalk

2. Shop and Play in Disney Springs

If you like the social scene of Disney’s BoardWalk then you’ll probably enjoy Disney Springs even more. With its large, expansive venues, there’s so much to do. We already touched on shopping for clothes earlier, but take note of the many other diverse interests awaiting you here. And these aren’t your typical stores; some are interactive attractions, like the LEGO Store, the Coca-Cola Store, M&M’s, and many others.

And don’t forget about the phenomenal dining scene, with a wide range of options catering to all different tastes and interests. And what about all those alternate attractions to come out of the cold to enjoy? Options include everything from taking in a movie at AMC Theatres, bowling at Splitsville Luxury Lanes, seeing the new Drawn to Life show presented by Cirque du Soleil, or enjoying live entertainment performances at countless onsite venues.

Related: Reasons to Head to Disney Springs This Holiday Season

We mentioned the dining scene at Disney Springs, but this isn’t the only place to enjoy sensational mealtime experiences. There are plenty of dining venues all throughout Walt Disney World, in parks and resort hotels alike, that feature delightful dining engagements you can spend a fair amount of time at. And for those who like slipping away for a drink, you will find plenty of options as well—perfect to get the blood flowing.

Even though the highs outside have been relatively low where Floridian standards are concerned, the magic of Disney is always warm enough, regardless of the physical temperature outside, to draw in guests any time of year.