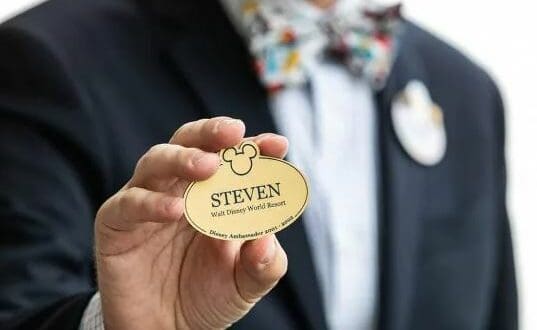 You may recall seeing special pins worn on the nametags of Disney Ambassadors to represent their home park. (Disney Cast Members can also be spotted with pins showing how many years they have worked for the company.) Now, for the first time ever, Disney Ambassador alumni will be recognized with their very own nametags inspired by the pins worn during their term as Ambassadors. The shape of the Disney Ambassador Alumni name tags along with the blue colors were taken from Disneyland employee badge #1, which Walt Disney himself wore briefly during opening day rehearsals for Disneyland in 1955 and on the Disneyland 10th Anniversary Show that was televised in 1965. Disney Ambassador Alumni from both the Walt Disney World Resort and Disneyland Resort joined in a special gathering just for present and former Disney Ambassadors where they were among the first Cast Members to receive these new name tags.

The Disney Parks Blog spoke with some of the Disney Ambassador Alumni after they received their new name tags to capture some of their excitement over this very special occasion. Walt Disney World Cast Member Rebecca Godsil, a Disney Ambassador in 2005, shared her thoughts that, “Becoming a part of the Ambassador family and representing our cast members is truly one of the biggest honors I’ve experienced, something I will always be humbled by and grateful for. What an incredible surprise to receive this special name tag to represent that honor.”