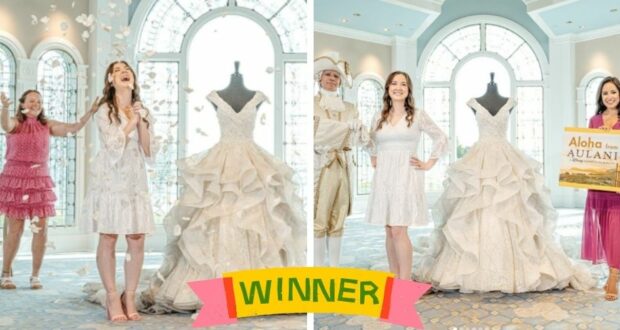 Disney Fairy Tale Weddings recently teamed up with Good Morning America to start a once-in-a-lifetime contest for brides all across America, and the winner of the contest has finally been announced! One lucky bride has been chosen to wear a wedding dress that is, quite literally, the only wedding gown of its kind.

Allure Bridals (which has the famous Disney Fairy Tale Weddings collection of Disney princess wedding dresses, and recently launched its biggest and most inclusive dress collection yet) created one unique wedding dress specifically to celebrate and be “inspired by” the 50th anniversary of Walt Disney World Resort.

This dress was introduced during Allure Bridals’ fashion show at the Magic Kingdom in front of Cinderella Castle; check it out below! The dress features tons of gorgeous detailing, including a ruffled skirt and lots of beading (specifically, more than 18,000 beads).

To enter, brides (or someone entering the contest for them) had to write 200 words about why the bride deserved the extra-special and literally one-of-a-kind wedding dress for her special day. Disney Weddings and Good Morning America finally announced the winner, and it is a lucky bride named Morgan!

Not only did Morgan win the wedding dress despite thousands of other competing brides, she also received a surprise bachelorette party from Disney! Morgan is an operating room nurse who has now gotten to enjoy not only the Ultimate Bachelorette Party, but also gets to wear the wedding dress that was designed to “embody all the princesses”. Take a look at Morgan’s bachelorette party and her orchestra-accompanied introduction to her wedding dress in the video above (not to mention her meeting with her favorite Disney princess, Belle, and the free Aulani honeymoon that Disney added into the mix)!

Morgan’s “Prince Charming” is Bryce, an Army Captain, and she and her fiance are getting married in Walt Disney World Resort’s Wedding Pavilion in December.

“A magical moment…🤩 Congratulations, Morgan! ❤️ We’re honored you get to wear the one-of-a-kind wedding dress inspired by the 50th Anniversary of @waltdisneyworld ✨” Disney Weddings said in their Instagram caption.

The winner of this contest was initially supposed to be announced last week, and Disney Parks actually Tweeted about the announcement the day before. However, presumably due to the Uvalde shooting, the announcement was postponed and the Tweet was deleted as Good Morning America focused on covering the tragic event.