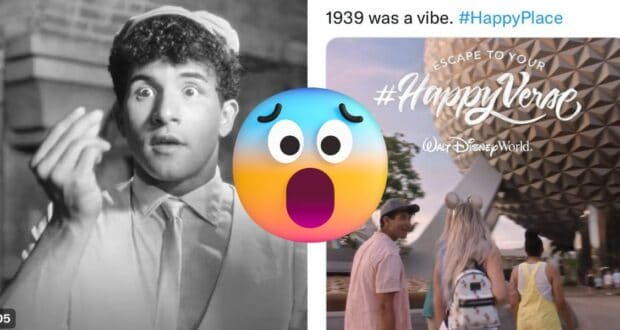 The Walt Disney Company and its Disney Parks or Disney Resorts have developed a bit of a reputation as a “woke” establishment — particularly in Florida, where Walt Disney World Resort has consistently been at odds with Florida politician Governor Ron DeSantis — but apparently, even “woke” Disney can still offend people!

The Walt Disney Company has gone through a lot of upheaval in recent months and particularly in the past two weeks, since CEO Bob Chapek has made his exit and former CEO Bob Iger has returned to the helm of the Walt Disney Company. Apparently, some things are still falling between the cracks in the midst of the power transfer!

Walt Disney World Resort recently Tweeted a Tweet on social media that was essentially an ode to the year 1939 — which is the year when World War II began, and is, unfortunately, a year when many other wrongs were still being committed in the world as well. Walt Disney World Resort did delete the Tweet after backlash began emerging, but screenshots and Tweets referencing the social media post remain.

Apparently, Disney World called 1939 “a vibe” in the Tweet, which is slang that typically means something positive. Needless to say, many former Disney fans have called out Disney for attributing positive traits to a year when a world war began — and a time period that was rife with difficulties and suffering that did not necessarily make it the “happy place” that Disney also referenced in the Tweet shown below.

Um, Disney World, whom did you think 1939 was a #HappyPlace for exactly? pic.twitter.com/99ObLVrYMS

Normally, Disney would notice and rectify a situation like this quickly — especially since Disney’s Stories Matter team has been poring over old Disney movies with a fine-toothed comb to check for anything potentially problematic. However, for some reason, Disney World let this offensive Tweet fester for almost six days!

It's more depressing than that: 1939 is a very important year in the Disney mythology (Walt gets the honorary Oscar for Snow White with 7 dwarf statues; he also visits the SF World's Fair and starts thinking about Disney World). It's just Disney solipsism

One Twitter user pointed out a possible reason for the Tweet, saying that “1939 is a very important year in the Disney mythology (Walt gets the honorary Oscar for Snow White with 7 dwarf statues; he also visits the SF World’s Fair and starts thinking about Disney World).” The Twitter user called this “Disney solipsism”, and another Twitter user called Disney’s Tweet “tone deaf”.

It would be nice if Walt Disney World was trending because of a pledge to lower park prices & impediments to the experience or perhaps news of a new attraction free of any IP & not because of a tone deaf Tweet about 1939 or regressives being upset about Splash Mountain's closure.

Did you see this Tweet? Do you think that Disney was in the wrong?