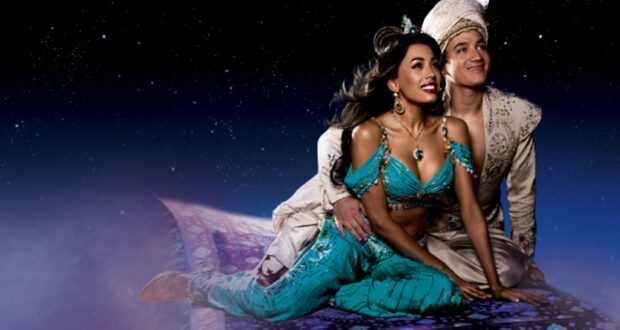 We were already ecstatic to hear that Walt Disney was back on Broadway, with not one but three shows returning to the stage; now, Disney and Broadway fans can also get a unique gift card for theater tickets as a celebration of the news! Disney Gift Cards have been given two new eye-catching designs for “Aladdin” and “The Lion King”, making them the perfect gift for any friend of yours who wants to head to New York City and buy a ticket (or two, or three) to see the shows.

Your Disney Gift Card is ready for Broadway! Check out these two new Disney Gift Card designs celebrating “Aladdin” and “The Lion King,” the perfect gift for the Broadway lover in your life: https://t.co/M6xtQNS15X pic.twitter.com/6XD2PPiYL7

One of the Gift Cards’ Associate Graphic Designers, Allison Friedlander, posted the news on the Disney Parks Blog. Disney Gift Cards are “good for practically all things Disney”, and they are always accompanied by “a coordinating greeting card carrier with space for a personalized message”, making them an even more suitable gift! With two new Tony-award-winning musicals gracing the cards, they only become more appealing.

Even if you don’t have a card with “Aladdin” or “The Lion King” on it, you can still use any existing Disney Gift Card to buy show tickets for the performances in New York City. The Disney on Broadway concierge team can help at DisneyOnBroadway.com/GiftCards, and gift cards can also be acquired within the New Amsterdam box office or “for merchandise purchases” at the New Amsterdam Theatre.

If you’re not planning on heading to New York anytime soon, that’s okay! Disney Gift Cards never expire or cost any fees. It’s also possible to add funds at “any Disney merchandise location”. Disney Gift Cards are also redeemable at Disney destinations including (but not limited to) Walt Disney World Resort, Disneyland Resort, Disney Cruise Line, and shopDisney! Are you heading to Broadway to see “Aladdin” or “The Lion King” (or both)? After hearing how excited the cast members are to be back, and seeing Aladdin and Princess Jasmine in rehearsals, we’re certain that they’re going to be great shows! Frozen might not have gotten its own Disney Gift Card , but it still looks like an amazing show too!