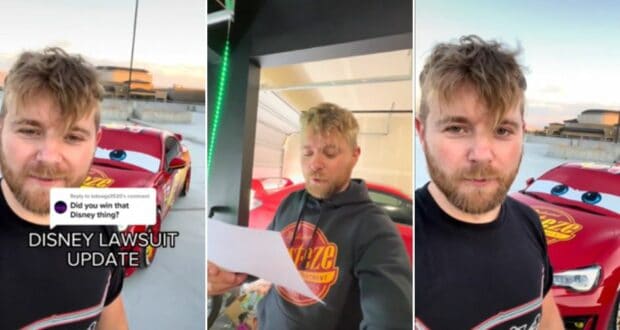 We previously shared that Disney filed a lawsuit against a popular Instagram and TikTok user that created his very own Lightning McQueen-themed car after Disney Pixar’s animated film franchise series, Cars (2006). Now, the TikToker provides a lawsuit update!

@ninefivegarage quickly became famous on social media for his reels which included a look-alike of the red #95 race car all us Disney fans know as Lightning McQueen. It wasn’t too long, however, before cops were saying the car wasn’t street legal which was followed shortly by Disney suing the fan for his impressive creation.

There is both good and bad news, as @ninefivegarage shares in the “Disney Lawsuit Update” video below:

He now as a Lightning McQueen look-alike in a corvette form, and, yes, Disney did sign off on it. @ninefivegarage added, “Kind of a bummer, but at least we were able to make a compromise.”

@ninefivegarage goes on to provide further details, including reading the lawsuit letter from The Walt Disney Company in the TikTok video below:

The TikToker may look at the corvette Lightning McQueen as a “downgrade” from the BRZ Lightning McQueen, but we’re still excited he’ll be able to continue producing Lightning McQueen-themed content for his followers to enjoy. He’s also been known to offer his car for charity events, and with this corvette change over, that should still be a possibility.

It’s impressive that @ninefivegarage could pull off such a flawless replica of Lightning McQueen that it was spotted by Disney. We’re thankful the lawsuit has been settled with a compromise that works.