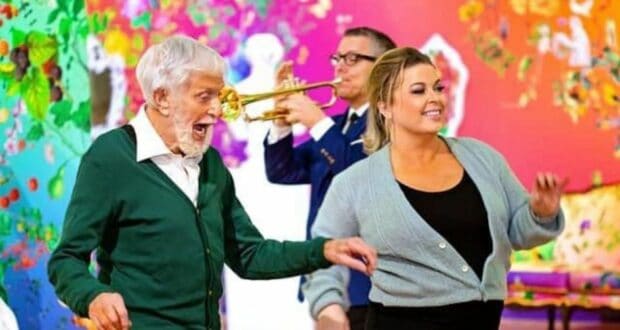 As one of Hollywood’s most beloved actors, we’re fairly certain we aren’t the only ones that enjoy hearing about the 96-year-old Disney Legend, Dick Van Dyke. Van Dyke was recently spotted making a rare public appearance with his wife, Arlene Silver.

Dick Van Dyke is well-known to us Disney fans for his talented appearance in the classic Disney film Mary Poppins in 1964. Van Dyke played the talented chimney sweep, Bert, that won over our hearts with his big smile and sweet spirit. Van Dyke later appeared in Mary Poppins Returns in 2018 as Mr. Dawes, Jr. Van Dyke got his big stardom however from his very own CBS television sitcom The Dick Van Dyke Show (1961–1966).

Van Dyke’s involvement with Disney and success on televisions and the big screen resulted in many awards including both Emmy Award and Grammy Award, as well as being named a Disney Legend in 1998.

Now, New York Post has reported that 96-year-old Dick Van Dyke and his 50-year-old wife were spotted on Wednesday, May 18, 2022, in Malibu, California, headed to lunch after finishing up a fitness class at a nearby gym. Take an extra close look at Van Dyke’s sweatshirt which perfectly says, “Spoonful of Sugar”.

In February 2022, Dick and Arlene released a music video celebrating their 10th wedding anniversary that had us feeling the love for Valentine’s Day with the dancing and singing! The couple met at the SAG awards as Arlene was a makeup artist. The 46-year age gap between Van Dyke and Silver doesn’t seem to stop the love these two feel for one another!