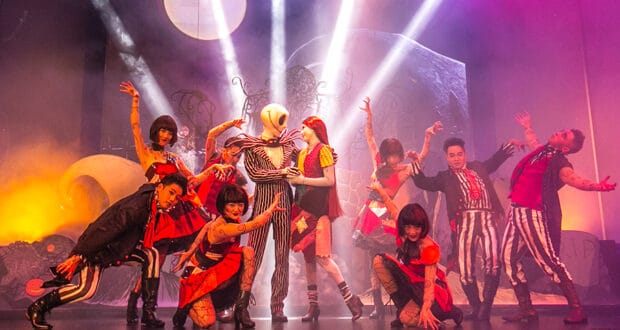 Autumn is in full swing in Disneyland and Walt Disney World, but did you know that the Halloweentime festivities are also well underway across the globe? Disneyland Paris, Hong Kong Disneyland Resort, Shanghai Disney Resort, and Tokyo Disney Resort all have some Halloween tricks and treats of their own! In Disneyland Paris, Disney’s Halloween Festival is happening now through November 7th: in Disneyland Park and in the Walt Disney Studios Park’s Studio Theater, you’ll be able to see lots of Disney villains up to no good! Disney’s Halloween Party will also take place, and includes “a special nighttime event full of Halloween treats and sneaky surprises”! We love the look of the patisserie desserts below.

Meanwhile within Hong Kong Disneyland Resort, Disney villains and Disney heroes will be sporting unique Halloween ensembles instead of their usual costumes until October 31st. Disney Guests can join in by coming to the Resort in costume too!

Hong Kong Disneyland Resort also has Mickey’s Halloween Time Street Party, “the beloved “Let’s Get Wicked” stage show”, the Halloween Time Festival Gardens’ trick-or-treating event, and a Wicked Fun Party Zone over in Adventureland! Keep an eye out for Loki while you’re there, and be sure to enjoy some Halloween cupcakes like the ones above. They may not be as delicate as Disneyland Paris’s patisserie, but they still look delicious! A new “Maleficent soft serve” at Midtown Delights and options like the “Halloween Snack Platter” or “Queen’s Brew” at Tahitian Terrace are just some of the other limited-time treats to try.

Shanghai Disney Resort’s Halloween festivities have been happening since October 4th, and they’re continuing until November 8th! Disney Guests can expect to see Disney Villains on the Enchanted Storybook Castle balcony, and to watch Ghost Pirates’ shenanigans in Treasure Cove after dark. A “This is Halloween!” Dance Party will ensure that you’re more excited than scared, though! In Disneytown, a Halloween Fun Carnival keeps the fun going ith special treats, Halloween decor, and even a Ghost Band!

The Tokyo Disney Resort refuses to be left out of the fun, and is hosting the “Mickey & Friends Greeting Parade: Disney Halloween” until October 31st. There will also be more unique Halloween foods and drinks to try, and between now and October 29th, a Halloween Morning Passport will also allow Guests to enter Tokyo Disneyland in the morning before it has opened! Which international Disney Park do you want to visit the most?