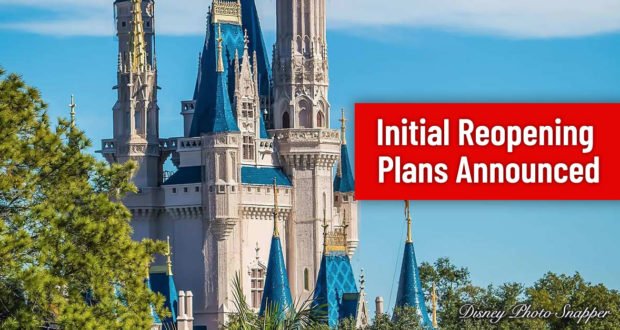 ORLANDO, Fla. – Walt Disney Co. officials have yet to reveal when its U.S. theme parks, including Magic Kingdom, will reopen due to the coronavirus pandemic but during an earnings call Tuesday company executives provided a glimpse of the measures theme park staff and guests will be required to take when the parks do reopen.

Disney CEO Bob Chapek said during the quarter two earnings call Shanghai Disneyland will begin a phased reopening on May 11. The park cannot exceed 30% capacity and when it opens next week Chapek said it will open well below that capacity at first.

Disney Parks Chief Medical Officer Dr. Pam Hymel called this “an encouraging sign for Disney parks and retail locations all over the world.”

In a message, Hymel provided details of different health and safety measures the company is exploring to prevent the spread of COVID-19.

Hymel said she is working with the U.S. Travel Association on a set of new guidelines, based on the Centers for Disease Control and Prevention recommendations, to help keep travelers safe during the pandemic.

Cast members will be provided with access to personal protective equipment, including face coverings. When parks do reopen there will be increased cleaning and disinfection in work areas and high-traffic areas of the parks, Hymel said.

The Disney chief medical officer said executives are looking at a gradual reopening for all or most locations.

Which would likely include shopping and dining at Disney Springs.

Physical distancing and capacity will also be part of the plan. Hymel said Disney is exploring ways to use technology to aid these efforts, such as the Play Disney Parks App and through virtual queues at Disneyland and Walt Disney World.

“As you can imagine, managing guest density in queues, restaurants, hotels, ride vehicles and other facilities throughout the park and across the resort is a major focus, as we implement physical distancing guidelines based on guidance from health authorities, such as the Centers for Disease Control and Prevention (CDC) and appropriate government agencies,” Hymel said. “This will likely include implementation of guest capacity measures to comply with state and federal guidelines.”

Hymel said executives are looking to the medical community and federal government for guidance regarding enhanced screening procedures and prevention measures, including the use of PPE, such as face coverings.

Some measures, like adding hand sanitizers and handwashing stations across our resorts, have already been implemented, Hymel said.

Disney officials have not announced a timeline for reopening its parks which have been closed since mid-March.

On the earnings call Tuesday, officials said they are considering admission based on dates in order to limit the number of people inside parks. Park goers would be assigned a date on their ticket.

Disney cruise lines will be the last travel-related business to reopen for the company, officials said.

Disney reported a steep decline in profit as many segments of its media and entertainment offerings have ground to a standstill during the coronavirus pandemic.

One bright spot was its Disney Plus streaming service, which contributed to an almost $3 billion revenue increase for direct-to-consumer and international business. Overall revenue rose 21 percent to $18.01 billion, just short of the $18.06 billion analysts expected.

The Associated Press contributed to this report.

You may also like: 7 Ways Disney Brightens Up A Not-So-Perfect World