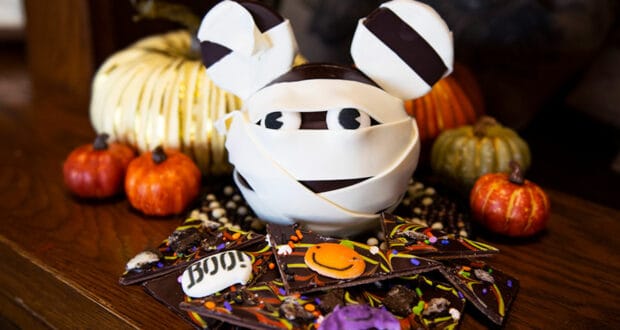 Welcome to autumn everyone! We’re already feeling more drawn to things that are comfy, orange, or cozy–and if you still need help choosing a Halloween costume, we’ve got several suggestions ranging from tomboyish to glamorous to complicated! If you’re lucky enough to be at Disney Springs this October, be sure to really take your time with meals–because Disney has just announced a whole slew of Halloween or autumn-themed offerings in Disney Springs! Read on for the highlights from the menus!

If you’re heading to Amorette’s Patisserie, bring your appetite! The Haunted Mansion Petit Cakes are a Disney Guest favorite. These “chocolate and vanilla chiffon cakes” are accompanied by “chocolate brownie” and topped with “diplomat cream”, “candy-coated chocolate pieces and chocolate chips”. If you’re craving pumpkin, definitely go for both the Pumpkin Pecan Cheesecake Roll (“pecan Chiffon cake, pumpkin cheesecake filling, and dulce nutmeg chocolate mousse”) and the Pumpkin Crème Brûlée (which is a “pumpkin custard with brûléed sugar, candied pecans, spiced whipped cream, and raspberry cranberry tuile”). You won’t want to miss out on one!

Fans of Coke should head to the Coca-Cola Rooftop Beverage Bar for the FANTAween Punch or the StrawScary Float and BlueScary Float with Ice Cream (pictured above), while on-the-go Disney Guests can get a great Pumpkin Spice cupcake at Disney’s Candy Cauldron & Goofy’s Candy Co.

Adults, head to Dockside Margaritas if you want a citrus drink that manages to both pirate-y and autumnal!  The Jack O’Lantern is “black rum, rum, white rum, orange-flavored triple sec liqueur, orange juice, lemonade, and a grenadine float”.

If you’re in the mood for something custom, or if you need a gluten-free or vegan dessert, then saunter over to Erin McKenna’s Bakery NYC! Their cupcakes, brownies, sugar cookies, and custom cakes will all be a delight. You’ll have to call (855) GOBABYCAKES if you want a custom one, though!

Sometimes in autumn you want chocolate desserts or candies, but sometimes you want a good old donut and coffee; when that urge strikes, Everglazed Donuts & Cold Brew is the place to be! The Pumpkin Spice Cold Brew and Great Pumpkin Donut are the perfect combination to usher in the new season. This will only be available October 25th through the 31st, though!

When that chocolate craving returns after your break for pumpkins, try The Ganachery’s Sister Elixir Cocoa Bomb. This “dark chocolate cauldron filled with hot cocoa mix and green marshmallows topped with an edible image of the Sanderson Sisters and a chocolate broom stirrer” is perfect for fans of Hocus Pocus (although it’s only available October 19th through October 31st. If you still need some pumpkin spice, go for the Pumpkin Spice Marshmallows or Pumpkin Spice Latte Ganache Squares, which contain pumpkin, spices, and Italian espresso with milk chocolate!

Need an adult beverage that has a sour hint to it? Order the Witch’s Flight from Jock Lindsey’s Hangar Bar. The combination of “whiskey, white grape juice, lime juice…green apple, orange-tangerine, and blackberry” will be staggering!

Many Disney Guests already know about Disney’s long-standing collaboration with Joffrey’s Coffee & Tea Company. Now there’s three special offerings for fall (not to mention the 50th anniversary special): the Pumpkin Pie Latte (“pumpkin pie syrup, milk and espresso”) and the Harvest Chai Latte are sure to impress, and you can request latte art on your drinks!

If you didn’t go for a custom cake at the NYC Bakery, but still really want a hefty portion of cake, then Gideon’s Bakehouse has the Frankencake just for you! The “three layers of chocolate cake, cookies & cream buttercream, layers of M&M’s, and spooky reverse ganache” is a cocoa-laden dream!

Want the Frankencake, but have a busy day? Then go to Sprinkles Cupcakes for the Black Velvet cupcake (“decadent dark chocolate cake…topped with whipped chocolate ganache frosting and a black modern dot”) or the Double Stuffed OREO cupcake (“rich chocolate filled and topped with orange, color vanilla buttercream with Halloween orange OREO cookie crust and an OREO rim topped with a black bat”)! The cupcakes’ availability varies by flavor throughout October.

Are you headed to Disney Springs for Halloween? Be sure to tag your food pictures with #DisneySprings while you’re there!