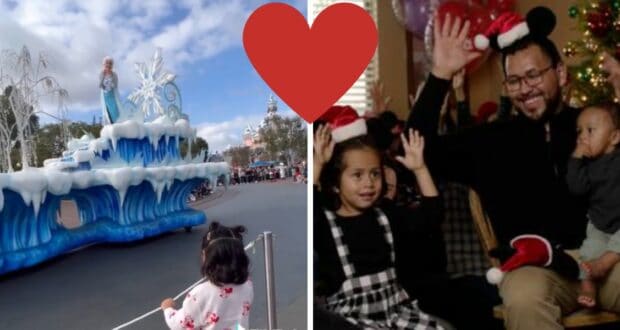 There have been a lot of angry Disney fans and negative news stories about Walt Disney World Resort, Disneyland Resort, and the Walt Disney Company as of late — but apparently, there is at least some Disney magic left! A family that has become known on social media as “That Deaf Family” — by their own design — has just been given a special treat by Disneyland!

Estefani Arevalo, Oscar Arevalo, and their children have become known on TikTok for their informative videos that help anyone who is unfamiliar with the deaf community to familiarize themselves with “deaf culture, deaf families,” and any questions that hearing families may have.

Disney has treated the Arevalo family to a Disneyland Resort trip, and revealed the happy news in their home while their loved ones looked on. “I feel so overwhelmed, so excited. I didn’t expect that, it’s such a surprise for us”, Estefani said. “I’m just really happy and blessed. I’m really thankful for everyone in my life.”

my Deaf daughter was so in awe of seeing Disney characters signing to her! This was such a heart touching moment! ❄️ #disneychristmascelebration

The family has shared several videos from Disney, including the heartwarming TikTok video above that shows the Disney princess Elsa and her fellow Disney princess (and queen) Anna using American Sign Language to speak to Estefani and Oscar Arevalo’s daughter during a parade!

Disney was very thoughtful in selecting the right VIP Tour Guide for us. JR had knowledge with ASL. It was great getting to know him for two days. ⭐️⭐️⭐️⭐️⭐️ Disneyland VIP Tour give you a person who will guide you all through the parks without you needing to make plans on where to go in the parks. They also give you Priority Access that allows you to get on many rides without the long waits. They also will tell you stories about different attractions. Having a guide really made the park experiences so much easier! I wish I could tell you about how we got this trip but a big surprise is coming and I can’t wait to share it with you all.

We have actually seen several Disney characters (aka Cast Members portraying Disney characters) using ASL during Character Meet and Greets. Mickey Mouse and Minnie Mouse, Shang-Chi, and another version of Queen Anna have all been spotted using ASL to make deaf community members’ day during their interactions!

Apparently, “That Deaf Family” was also paired with a VIP Tour Guide named JR, who speaks ASL and has been studying it for 11 years. Estefani said on TikTok that she really appreciated the “very thoughtful” and helpful gesture!

If you’re a fan of “That Deaf Family” and are in the mood for some heartwarming holiday Disney magic, then be sure to tune in on ABC on  Christmas Day to watch the Disney Parks Magical Christmas Day Parade!

The family’s happy occasion will be featured! This Disney Parks Magical Christmas Day Parade will air on ABC at 10 a.m. ET, 9 a.m. CT, 8 a.m. MT, and 7 a.m. PT. It will also appear on streaming services like Freeform, Hulu, and Disney+ for anyone who can’t watch it on ABC.

In the meantime, take a look at the TikTok videos shown above from this popular family (@thatdeafamily on social media), which reveal just how much fun and Disney magic the family has been experiencing!