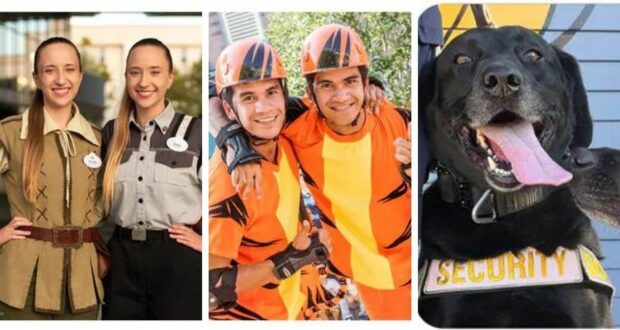 To some people, today is a regular Tuesday — but to anyone who pays attention to the calendar, it’s a very special day! Today is 2/22/2022, a rare kind of day, and the Disney Parks Blog is celebrating the very exclusive holiday by introducing twin Cast Members who suit the theme of “two”!

Caroline LeMasters, a Communications Specialist for Walt Disney World Resort, wrote on the Disney Parks Blog that this “TWOsday” is meant to celebrate the palindrome dates that have occurred this February (2/2/22 and 2/22/22). “We are celebrating even more Cast Member twins that work TWOgether—this time at Disney Parks around the world!” LeMasters wrote.

Kaisha and Erika are twins in their third year of the Disney College Program; Kaisha works in Fantasyland, and Erika works in Tomorrowland.

The twins emphasized how wonderful it is to work at Disney alongside other Cast Members, saying that “the work families we have found here at Walt Disney World are unparalleled – they accept each of us for who we are individually and for who we are together. Having double the Disney families to enjoy is twice the blessing we could ever ask for.”

Far across the globe are two more Disney twins: Rodolf and Randolf, dancers from the Philippines, who have performed at Hong Kong Disneyland Resort since they were 22 years old. Another pair of Disney twins are Wendy and Cindy, sisters whose love of Disney has expanded to their spouses and children. Wendy was actually a Disneyland ambassador in 1989!

Although lots of these twins work in different departments as Disney Cast Members, Emanuel and Mauricio (shown below) actually work in the same department as part of the Disney College Program. The duo work with the Concierge team at Disney’s Port Orleans Riverside Resort!

Further afield at the Disneyland Paris Resort are Quentin and Berenger, twins who share Walt Disney’s December 5 birthday and who have both been honored with the Walt Disney Legacy Award. These siblings worked in Disneyland Paris restaurants together back in 2005, and still “hope that [they] will work together for Disney until the end of [their] careers”!

This last pair of Disney twins is a bit more unexpected. Simba and Samford are two canines at Walt Disney World Resort who work as security dogs, and who work with two canine handlers (Damascus and Brooklyn) who are also close friends. All four security team members are called “The Twins”, because they’re so close, and Simba and Samford often patrol together!