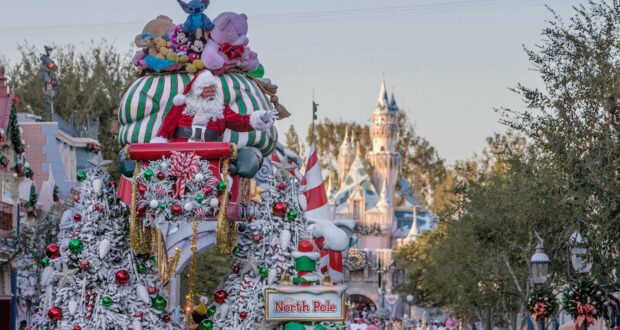 Even though summer isn’t over and Halloween isn’t here yet (and neither is the Oogie Boogie Bash), Disneyland is already gearing up for the holidays and has chosen a ‘start date’ of  November 12! Disneyland’s holiday season will last until January 9th, three days longer than previously. Disney Guests can admire Sleeping Beauty’s castle in its winter attire, as well as a 60-foot-tall Christmas tree on Main Street U.S.A, and that’s just the beginning!

The “Christmas Fantasy” parade will also be occupying Main Street, U.S.A, and Santa Claus sightings can be expected throughout the parks. Disney is also recommending that Disney romantics watch the “Believe…in Holiday Magic” firework- and snow-filled event “for the perfect kiss goodnight”. It’s a Small World and the Haunted Mansion are both getting holiday makeovers, as well!

Christmas isn’t the only holiday getting its recognition at Disneyland this winter! Disneyland California Adventure’s Festival of Holidays will include celebrations of Christmas/Navidad, Diwali, Hanukkah, Kwanzaa, and Three Kings Day. The popular street party “Disney ¡Viva Navidad!” stars Mexican folklórico dancers and Mariachis, as well as Brazilian samba dancers and percussionists, giant mojiganga puppets (and, of course, Mickey Mouse and Minnie Mouse)! Paradise Gardens will be offering appropriately-themed food and beverages, there will be plenty of live music to dance to, and Mirabel from the upcoming Walt Disney Animation Studios’ movie called “Encanto” will officially be welcome to the park.

After Cars Land has recovered from its Halloween transformation, the automotive area will switch to its holiday styles. Two of Cars Land’s attractions will also undergo temporary transformations into Luigi’s Joy to the Whirl and Mater’s Jingle Jamboree!

Disneyland’s parks aren’t the only places getting ready for the holiday season on November 12th. In Downtown Disney District and the Disneyland Resort hotels, you can expect plenty of holiday decorations and inspiration! Keep an eye out at Disney’s Grand Californian Hotel & Spa for a particularly spectacular gingerbread house–because nobody celebrates in grand gestures like Disney does.

How will you be spending the holidays Disney this year? What is your favorite part of Disneyland’s celebration?