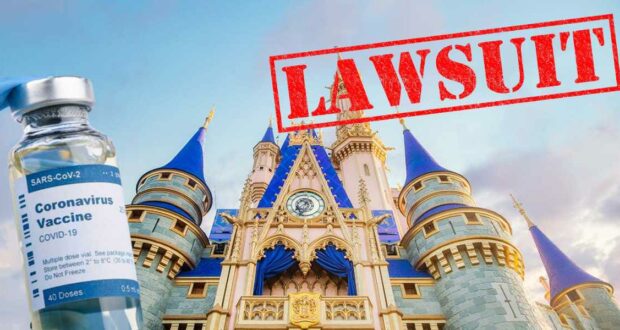 Two former Disney World employees are suing the company due to termination because of Disney’s policies of mandated Covid-19 vaccinations.

It’s been years since the Walt Disney Company started instituting policies regarding all employees getting a mandatory vaccination for Covid-19 coronavirus as a response to the pandemic that has irrevocably changed the world over the last few years. However, their troubles are not over, and pushback against this policy continues to rear its head, with the latest development being a lawsuit from former employees.

While mandatory vaccination is a policy that has been highly contested by many, Florida Governor Ron DeSantis took active steps to challenge this, signing into law a ban on vaccine mandates. Despite all these steps, some claim they lost their jobs because they refused to get the jab and are taking the Mouse House to task for the same.

Former Disney employees Cheron Hayes and Seth Schmidt spoke to WESH 2‘s Greg Fox about suing the Walt Disney Company for “discrimination” under the Florida Civil Rights Act, along with their attorney.

The employees both put forth they were fired from their jobs despite their claims of religious exemptions for getting the COVID-19 shot.

The trouble began with Hayes, who said she was fired on November 8, 2021. “I thought I’d found the company I would retire from, and, so for them to hit me with this, just for a shot, and for them to literally say, ‘No shot, no job,’ was, you know, it was very humiliating,” she said.

Hayes was a senior financial analyst at Disney for almost 15 years. The head of the HR department for the Mouse House sent out a letter letting all U.S.-based employees know that COVID-19 vaccinations were required, and they had 60 days to comply on July 30, 2021. Disney’s chief human resources officer, Paul Richardson, stressed, “We believe it is important to put the safety of our employees and Cast Members at the forefront.”

Even after Florida Gov. Ron DeSantis signed into law that vaccines couldn’t be mandated, Schmidt was fired. Schmidt, an 11-year Disney’s Hollywood Studios employee, said his religious exemption was denied, and he was consequently fired from his position. “My manager said it’s not because of the job. ‘You do a great job. But because of all our policies, we have to let you go.’ It just felt disheartening,” Schmidt added.

The employees’ attorney, Rachel Rodriguez, also gave her statement. She now has seven plaintiffs in the case, and argues the law is on the employees’ side. Rodriguez commented that “the problems here have to do with discrimination under long-standing law,” adding that Disney “violated the privacy rights of all of their cast members in Florida.”