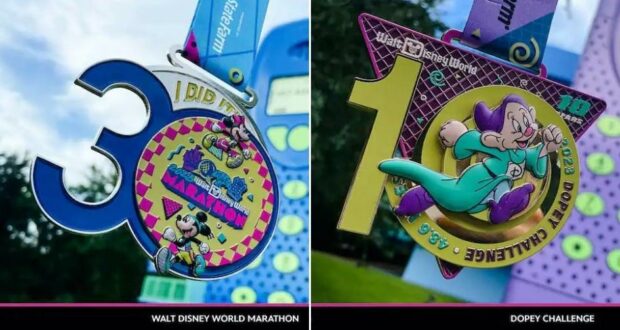 Everybody grab your walkman and your favorite mixtape! The Walt Disney World Resort’s 2023 Marathon Weekend is going back to the 90s!

While runDisney’s annual takeover of EPCOT, the Magic Kingdom, Disney’s Hollywood Studios, and Disney’s Animal Kingdom is still several months away, the medals and theme for the 2023 Walt Disney World Marathon Weekend presented by State Farm were shared by Disney this week, commemorating its 30th Anniversary. “It’s a four-park running celebration that’s been 30 years in the making and we invite you to join us for a weekend with a dose of 90’s retro vibes, iconic characters and a glimpse into the runDisney of years past…This year’s medals commemorate 30 years of runDisney with colorful designs paying homage to the decade this race weekend got its start.” The Walt Disney World Resort Marathon Weekend, Presented by State Farm, will take place from January 5 – January 8, 2023. According to the runDisney website, all races are already sold out, with virtual race packages still available.