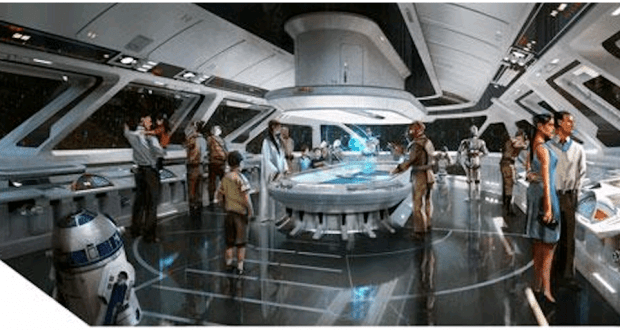 We have received word from WDW News Today that guests are being polled about the interest in a Star Wars resort experience at Walt Disney World.  The experience would be a luxury experience that would be designed like you are staying on a star ship from Star Wars.  This “resort” would also be attached to Disney’s Hollywood Studios.  The poll is through Swagbucks.com and includes concept art and details about the experience.

Here is what we know about the expected events and experiences that would be available:

Here is our best guess about the resort and accommodations that would be available:

The experience is expected to be priced at around $900 – $1000 per guest.  We would expect that the experience would go up in price around peak seasons and holidays, too.

This is only a survey, currently, but it appears that Disney is pretty serious about this possible experience given the concept art and the effort put into polling guests to help determine experiences, price points, etc.  We really hope that we get to see this “resort” come to fruition, since this experience seems to be nothing short of amazing.

How many of you would book the experience if you could?  This one seems worth the money!

One of the biggest wins for The Walt Disney Company has been acquiring the Star Wars franchise. With a storyline and characters that are appealing to people of all ages, there is opportunity to build an even bigger fan base—and Disney intends to do just that. The announcement of Star Wars Land at both Walt Disney World and Disneyland has many fans excited for what’s to come, but don’t worry—there are still plenty of experiences that will aid in getting your Star Wars fix right now. Here are four major Star Wars experiences that you will love and where to find them.

4) Jedi Training – Trials of the Temple- Though this is an experience that only children can participate in, everyone is welcome to watch the new recruits learn how to use the force in order to defeat notorious Star Wars villains. Crowd participation is welcome and necessary as the new recruits will need plenty of support when facing the evil Darth Vader! This show is on the stage directly next to the entrance to Star Tours at Disney’s Hollywood Studios and has several show times throughout the day.

3) Star Wars: A Galactic Spectacular – Star Wars and fireworks? Sign me up! This nightly fireworks spectacular takes place around the time of park close and can be seen best in front of the Chinese Theatre at Disney’s Hollywood Studios. A brilliant medley of the famous Star Wars score is the background music for the breathtaking fireworks that will burst high above the Chinese Theatre, so make sure you have your camera ready so you can take pictures! This display is similar to the one that was shown during Star Wars Weekends once upon a time, so for those who are missing the festive weekends like I am this will bring back positive memories!

2) Star Tours – The Adventure Continues- As of now, this is the only Star Wars attraction at Disney’s Hollywood Studios as they prepare to bring the franchise to life with the opening of Star Wars Land. However, this attraction is more than enough for those who are fans of Star Wars, both new and old. You will blast off in a Starspeeder 1000 into the Star Wars galaxy, encountering several beloved, and notorious, characters along the way. The purpose of this 3D adventure is to make sure that the rebel spy, which is on board your speeder, makes it safely to their destination. Adults and kids will love this attraction, and because the scenes are randomized and different every time, you have an excuse to ride it again and again!

1) Star Wars Launch Bay – Perhaps the most impressive Star Wars experience at Disney’s Hollywood Studios, Star Wars Launch Bay is nestled inside the former Animation building in Animation Courtyard. There is an extensive list of things you can do in here, so let’s dive right in. The two most popular experiences within Launch Bay are the character greetings with Chewbacca and Kylo Ren. Take your pick of the light or dark side and have a character interaction unlike any other at the parks. Chewbacca gives the best hugs and Kylo is incredibly intimidating, so it all depends on if you’re feeling cuddly or brave that day! You can also meet and trade with Jawa’s that are walking around the area. If character greetings aren’t your thing, you can check out the Launch Bay Theater, which houses a 10-minute behind-the-scenes film complete with exclusive interviews from the people who were responsible for bringing this franchise to life. And don’t worry, merchandise fanatics—there is plenty for you, too! You are able to purchase your regular Star Wars merchandise – toys, shirts and books – but, you are also able to purchase sculptures, memorabilia, movie prop replicas and phone cases inspired by the movies! These are similar to the things that could be purchased during Star Wars Weekends, so load up on your merchandise! There are also special galleries that house different props, costumes, artifacts and concept work from the movies, so check that out as you’re making your way through the Launch Bay.

There is a multitude of things to do at Disney’s Hollywood Studios if you are a fan of Star Wars, From fireworks to a 3D adventure and special character greetings, you won’t be disappointed. Just be sure to return for even more Star Wars fun once Star Wars Land opens in the next few years!