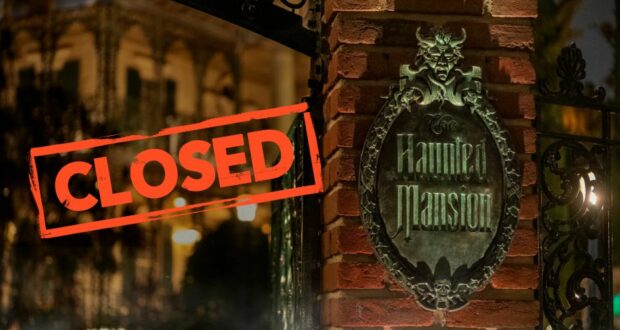 Goodbye summer! The fall season is upon us, and Disney Parks, including Walt Disney World Resort and Disneyland Resort, are getting into the spooky spirit with fan-favorite seasonal decor and special events. As Guests make Disneyland plans, however, note that the iconic Haunted Mansion attraction is now closed for retheming.

With the spooktacular festivities underway, Disneyland Resort is preparing to wow daytime Guests and special-ticketed party Guests with its fan-favorite “Haunted Mansion Holiday.”

According to Disneyland Resort’s website, “Haunted Mansion will be closed for refurbishment from August 15 to September 1, 2022, and will reopen on September 2, 2022, as Haunted Mansion Holiday for a limited time.”

That’s right – Haunted Mansion is being rethemed to be “Decked Out for the Hallow-Days” until October 31, 2022, with Disney noting:

“Pumpkin King Jack Skellington has been busy decorating the Haunted Mansion with frightfully festive touches inspired by Tim Burton’s The Nightmare Before Christmas. Experience thrilling sights and seasonal surprises created by the citizens of Halloween Town. Sally, Oogie Boogie and other Nightmare nasties will be on hand to wish you “Season’s Screamings!”

Disneyland Park also transforms the Haunted Mansion with a Christmas overlay during the holiday season with The Nightmare Before Christmas but features “Sandy Claws” (AKA Jack Skellington as Santa).

Sorry, Walt Disney World travelers! Unfortunately, this Haunted Mansion Holiday retheme is only available at Disneyland Park. The Magic Kingdom theme park Haunted Mansion remains as is throughout the holidays, but there are a few special character moments (such as Madame Renatta) just outside of the Mansion during Mickey’s Not-So-Scary Halloween Party.