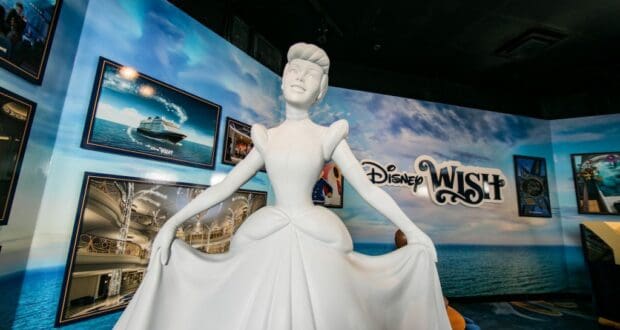 Have you ever been on a Disney Cruise? If not, now might be the time to start booking one! Disney’s newest cruise ship, the Disney Wish, is going to have all sorts of wonderful amenities and experiences in store for Disney Guests. If you’re thinking of book a cruise on the Disney Wish, or if you just want to reminisce about your own Disney Cruise Line journeys, then you can also head over to Disney’s Hollywood Studios now for a cruise-specific exhibit that allows you to not only preview the Disney Wish’s special decor, but also to “enter a world where wishes come true, where princesses meet pirates, where heroes meet destiny – and where magic meets the sea”!

The “new Disney Cruise Line exhibit” is now open to visitors at Walt Disney Presents. According to the Disney Parks Blog, this exhibit is not just “a celebration of the fleet’s history”; it also has a “one-of-a-kind gallery space” that “features never-before-seen artifacts and photos from the making of the Disney Wish”!  Some of the features on display are “a life-size maquette of the Cinderella statue that will grace the Grand Hall” (which you can see in the image above), “an intricately detailed, 5 1/2-foot scale model of the [Disney Wish]” (seen above), “replicas of the Disney Animation maquettes that will adorn the dining rooms at 1923, an elegant family restaurant inspired by the golden age of Hollywood”, and a “scale concept model used to design the larger-than-life stern statue of Rapunzel”. We’re particularly fond of the Rapunzel, Mother Gothel, and Flynn Rider slash Eugene Fitzherbert models from Tangled!

Apparently there are “even more surprises and sneak peeks in the exhibit, but you’ll have to visit the Walt Disney Presents attraction” (which is “located in Animation Courtyard at Disney’s Hollywood Studios“) to see them! Are you booking a 2022 cruise on the Disney Wish now that you’ve seen some of its special features? And have you already seen this ship’s incredible Cinderella-themed atrium?