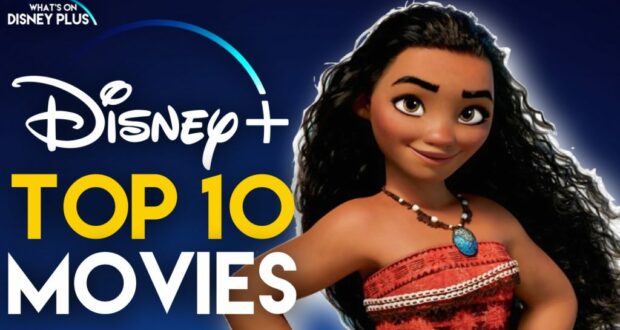 Do You Agree with the Top 10 Most Popular Movies on Disney+ in February?

WhatsOnDisneyPlus releases the top 10 movies on Disney+ each month and we have their list for February. Take a look and see if you agree or if there are ones you need to watch still before deciding.

Easily one of my favourite modern animated movies and sees Moana answer the call of the ocean, taking to the seas to save her people from a terrible curse. The movie features Dwayne “The Rock” Johnson as the Demigod Maui and his character really adds some great comedy moments. Moana delivers an awesome soundtrack including “Your Welcome” and “How Far I’ll Go”.   This movie rarely has left the top of the trending charts, showing how popular this film is with kids who must be watching this one on repeat a fair few times a week!

Elsa the Snow Queen has an extraordinary gift — the power to create ice and snow. But no matter how happy she is to be surrounded by the people of Arendelle, Elsa finds herself strangely unsettled. After hearing a mysterious voice call out to her, Elsa travels to the enchanted forests and dark seas beyond her kingdom — an adventure that soon turns into a journey of self-discovery.

Pixar’s “Soul” introduces Joe Gardner, who is a middle-school band teacher who gets the chance of a lifetime to play at the best jazz club in town. But one small misstep takes him from the streets of New York City to The Great Before – a fantastical place where new souls get their personalities, quirks and interests before they go to Earth. Determined to return to his life, Joe teams up with a precocious soul, 22, who has never understood the appeal of the human experience. As Joe desperately tries to show 22 what’s great about living, he may just discover the answers to some of life’s most important questions. This is a really enjoyable Pixar movie that has one level for kids and a much deeper level for adults to think about their lives.

This movie was a juggernaut for Disney in the past decade, from the box office, merchandise, music and even on Broadway. When their kingdom becomes trapped in perpetual winter, fearless Anna (Kristen Bell) joins forces with mountaineer Kristoff (Jonathan Groff) and his reindeer sidekick to find Anna’s sister, Snow Queen Elsa (Idina Menzel), and break her icy spell. Although their epic journey leads them to encounters with mystical trolls, a comedic snowman (Josh Gad), harsh conditions, and magic at every turn, Anna and Kristoff bravely push onward in a race to save their kingdom from winter’s cold grip.

The biggest blockbuster ever is set after the devastating events of Avengers: Infinity War, the universe is in ruins due to the efforts of the Mad Titan, Thanos. With the help of remaining allies, the Avengers must assemble once more in order to undo Thanos’ actions and restore order to the universe once and for all, no matter what consequences may be in store.

Toy Story 4 sees Woody attempt to make Forky, a toy, suffering from an existential crisis, realise his importance in the life of Bonnie, their owner. However, things become difficult when Gabby Gabby enters their lives.

The biggest new movie to debut on Disney+ in February was “Flora & Ulysses” has made a big splash with viewers this month.  When Flora rescues a squirrel she names Ulysses, she is amazed to discover he possesses unique superhero powers, which take them on an adventure of humorous complications that ultimately change Flora’s life–and her outlook–forever.   I’d really recommend if you haven’t checked this film out, do so.

A teenager finds herself transported to a deep forest setting where a battle between the forces of good and the forces of evil is taking place. She bands together with a rag-tag group characters in order to save their world—and ours.  This movie has also been a recent addition to Disney+ and this 20th Century Studios animated movie is well worth checking out.  I also watched this movie this past month, since I hadn’t seen it before and was intrigued.  So I’m guessing lots of people did the same as me.

Cinderella chafes under the cruelty of her wicked stepmother and her evil stepsisters, until her Fairy Godmother steps in to change her life for one unforgettable night. At the ball, she falls for handsome Prince Christopher, whose parents, King Maximillian and Queen Constantina, are anxious for him to find a suitable paramour. This version of Cinderella from 1997 was added to Disney+ in February and has been a huge hit for Disney+, pulling in many fans who haven’t seen this movie in a long time.

The original Toy Story continues to pull audiences in, over 2 decades later.  Led by Woody, Andy’s toys live happily in his room until Andy’s birthday brings Buzz Lightyear onto the scene. Afraid of losing his place in Andy’s heart, Woody plots against Buzz. But when circumstances separate Buzz and Woody from their owner, the duo eventually learns to put aside their differences.

Which movie do you still need to watch? Which is a favorite arleady?

2021-02-28
Jennifer Retzlaff
Previous: A Look Inside “Raya and the Last Dragon” with Cast and Creator Interviews
Next: Deploy the Fleet For the New Star Wars X Herschel Collection