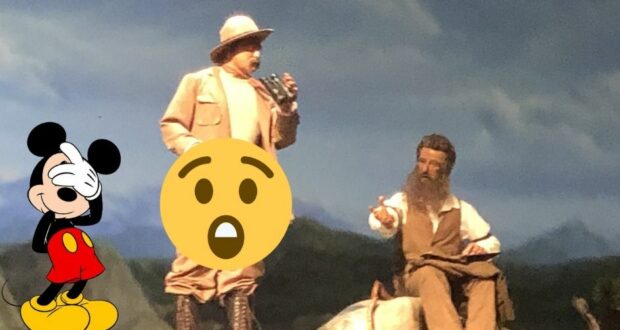 EPCOT’s Teddy Roosevelt Caught With Broke Belt and Pants Down

While visiting EPCOT’s American Adventure show within the World Showcase, one Disney fan spotted President Theodore Roosevelt audio-animatronic without a belt, leaving the 26th United States President with his pants down.

Mishaps happen at Walt Disney World Resort and now with social media and a camera around every corner, those hiccup moments easily go viral. From the video of the Guest skipping the seatbelt and hitting the ceiling of Tower of Terror to seeing the massive Na’vi River Journey animatronic at Disney’s Animal Kingdom malfunction – every moment seems to go noticed.

While American Adventure is typically a quiet Disney Park show there are 35 audio-animatronics figures within the production and for poor Teddy… things went wrong.

@TammyTuckey shared the photo with the tweet, “Teddy’s belt broken and his pants are down! Told the team at AA and they’re gonna get him a new belt. #EPCOT“. Tammy further goes on to note in the comments, that the photo was taken on April 23 at the 7:30 pm American Adventures show. Check out the photo in the tweet below:

The comments on the photo are the most interesting part. The question of if Disney’s audio-animatronics wear underwear is solved:

Yes, thank goodness! As you can see in the tweets below, the jokes roll in!

Winnie the Pooh would agree that life is too short for pants anyway:

In this dramatic production featuring 35 Audio-Animatronics figures, digital rear-projection images on a 72-foot screen and stirring patriotic songs, you’ll watch firsthand as America’s story unfolds. Take your seat in a stately Colonial theater and meet Benjamin Franklin and Mark Twain—your guides on this trip through time. Witness landmark events like landing of the Mayflower, the Boston Tea Party, the winter at Valley Forge, the penning of the Declaration of Independence, the Civil War and the Great Depression. You’ll even encounter luminaries like Susan B. Anthony, Frederick Douglass, Thomas Jefferson, Chief Joseph and Teddy Roosevelt, among others.

Poor Teddy! We’re thankful this Disney fan advised Cast Members as we’re sure they contacted maintenance and fixed the problem right away.