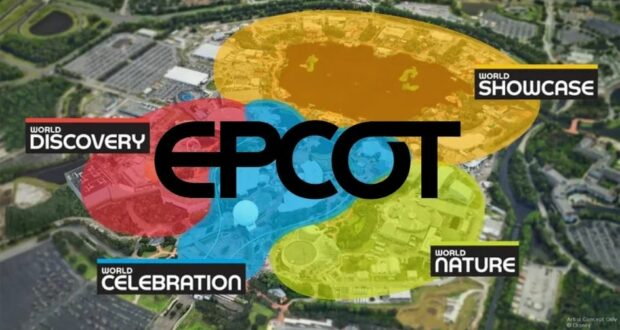 Walt Disney, himself, said EPCOT “would always be in a state of becoming”. 50 years after the Walt Disney World Resort opened, we’re seeing EPCOT’s massive transformation take shape. As you plan your next visit to EPCOT, here’s what to know as Disney tackles a “four neighborhood” approach to the beloved Park.

Let’s begin with the front of EPCOT where the new World Celebration greets Disney Parks Guests in a whole new way.

The most noticeable change is the new EPCOT entrance plaza. Instead of the former Leave a Legacy concrete blocks filling the area, they have been moved to make way for a new, welcoming entrance to the Park. A new fountain, new landscaping, new flags, and a new lighting package (Beacon of Magic lights) for the iconic Spaceship Earth have brightened the area.

Even though Disney initially announced a reimagining for the beloved Spaceship Earth attraction, it seems like COVID made this project go on hold for now.

We’ve seen recent additions of Creations Shop (much like the former MouseGears), the new Club Cool Hosted by Coca-Cola, along with a newly opened quick-service restaurant and Starbucks called Connections Cafe and Eatery.

Lastly, the classic attraction, Journey Into Imagination With Figment along with Disney and Pixar Short Film Festival are considered to be part of the World Celebration neighborhood.

When going left at Spaceship Earth, Guests will head to the 2nd neighborhood on our list, World Discovery.

World Discovery is currently the center of much Disney fan excitement as Guests are thrilled with the new Guardians of the Galaxy: Cosmic Rewind attraction at EPCOT. The attraction opened in May 2022 and Disney fans can’t get enough of it!

Disney notes Cosmic Rewind as a “family-friendly adventure that starts in the Galaxarium, a planetarium-like exhibition that explores the similarities and mysteries of the formation of Earth’s galaxy and Xandar. Guests will learn more about the treasures Xandar has to share – until the moment when the Guardians of the Galaxy arrive, and Guests go on an intergalactic chase through space and time.”

Furthermore, the new roller coaster features are considered a “story coaster” that will actually rotate 360 degrees to focus Guests on the action during the ride, including the first reverse launch on a Disney coaster.

As if that’s not exciting enough, Disney fans are loving the new Space 220 Restaurant in World Discovery which makes Guests feel like they are dining 220 miles above Earth’s surface.

Attractions including Mission: SPACE and Test Track remain in the World Discovery neighborhood.

One of the biggest changes in World Showcase is the expanded France Pavilion which is now home to Remy’s Ratatouille Adventure attraction. The new experience is a family-friendly ride inspired by Disney Pixar’s film Ratatouille (2007) with Chef Remy as your guide.

In The American Adventure Pavilion Guests are rolling up their sleeves and chowing down as excellent American barbeque at Regal Eagle Smokehouse: Craft Drafts & Barbecue.

And while we’re still keeping our fingers crossed, Disney has remained pretty quiet about the previously announced United Kingdom Pavilion updates to include a Mary Poppins-theme attraction and street.

Lastly, as of October 1st, 2021, Disney has introduced its largest nighttime spectacular ever created (that replaced EPCOT Forever) called “Harmonious” which lights up the World Showcase Lagoon nightly.

Additional attractions such as Gran Fiesta Tour Starring The Three Caballeros, Frozen Ever After, Reflection of China, The American Adventure, and Canada Far and Wide remain in the World Showcase.

Last but not least, we complete our clockwise tour of EPCOT with its fourth neighborhood, World Nature.

Currently, Guests can enjoy fan-favorite attractions in The Land Pavilion such as Soarin’ Around the World, Living With the Land, and the 10-minute show “Awesome Planet”.

The Seas Pavilion still holds attractions including The Seas with Nemo & Friends, Turtle Talk with Crush, and the massive aquarium for all ages to enjoy.

The highly-anticipated addition to World Nature is Journey of Water, Inspired by Moana. Disney describes this incoming experience as a “lush exploration trail that will invite Guests to meet and play with magical, living water. Just like Moana’s friend the ocean, water will have a personality of its own, helping Guests learn how to protect the natural water cycle in a fun and engaging way.”

While we’ve seen construction progress on the new Moana attraction, Disney Imagineers have hinted that it will likely be 2022 before it opens to Guests.

As you plan your next visit to EPCOT, take note that construction is very apparent as you explore these new EPCOT neighborhoods. We do however believe a little pixie dust is well-worth what we know will be a stunning outcome for EPCOT as Walt Disney Imagineering works its magic!

2022-04-14
Jamie Sylvester
Previous: Virtual Queue Added to World of Color for Its Upcoming Return to Disney California Adventure
Next: Newsies: From Razzie Winner to Broadway Smash