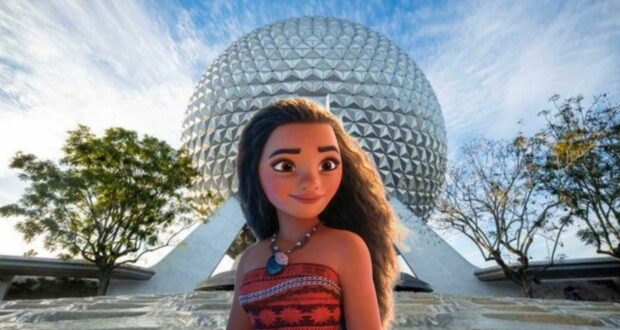 “Make way. Make way…” Moana is moving in at Walt Disney World’s EPCOT! Check out the most recent progress for the highly anticipated experience.

When Disney’s animated film Moana debuted in 2016, it was no surprise that it became a huge success. Disney fans were enthralled with the music, the animation, and of course the fun characters.

While we may now have Moana-themed rooms at Disney’s Polynesian Village Resort, we have waited six years to see a much-deserved Moana-inspired attraction in the works.

EPCOT is currently full of construction seemingly around every corner as the Disney Parks undergoes a massive transformation from the original Future World and World Showcase divide of the Park to four neighborhoods including World Celebration, World Discovery, World Nature, and World Showcase.

While much of the excitement right now is focused on World Discovery and the soon-to-be opening Guardians of the Galaxy: Cosmic Rewind roller coaster, we’re shifting our focus to a hot construction spot in the World Nature neighborhood.

Disney notes, “Journey of Water, Inspired by Moana will be the first Disney Parks experience evoking the hit Walt Disney Animation Studios film. This lush exploration trail will invite guests to meet and play with magical, living water. Just like Moana’s friend the ocean, water will have a personality of its own, helping guests learn how to protect the natural water cycle in a fun and engaging way.”

@bioreconstruct recently took to social media to share several construction photos of the Moana attraction’s progress. As of April 9, 2022, here are some of the newest concrete forms on the site of Journey of Water:

Right now it may look like one big cement jungle, but we suspect there are fascinating things happening with the technology to make way for the Guest interaction promised with this experience.

@bioreconstruct goes on to note in the image below, “Current view of Journey of Water. At right of the crane seems to be the first structural frame for rock work.”

Here’s a zoom-in of the first structural frame for rock work in Journey of Water below.

Here’s the scaffolding around one of the stairways near Journey of Water. @bioreconstruct notes, “This stairway goes down into the basement remaining from the demolition of Innoventions West.”

Even though a USA Today article shared by Disney Parks Twitter noted Journey of Water, Inspired by Moana will probably open “after 2021”, we’re thrilled to see the experience is already taking shape!