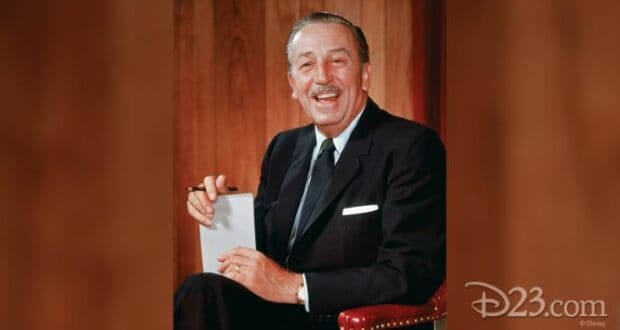 Facts About the Life and Legacy of Walter Elias Disney

December marks the month when Walt Elias Disney was born into this world, on December 5th, 1901. It is also, sadly, the month that he died, on December 15th, 1966. In looking back on the life and legacy of Walt Disney, we can see that all of the innumerable contributions given to us by this great man throughout his lifetime were just as influential back then as they are now (ranging from the familiar and friendly ways in which he conferred with others to his innovative contributions in entertainment both on-screen and through Disney Parks). Now we’re honoring Walt Disney by presenting fifteen interesting facts about his life, legacy, and who he was personally as a family man and friend to all.

We all know that Walt Disney produced a wide range of cartoon film adaptations inspired from earlier tales and stories. But one film in particular hit a far more personal note than others: his adaptation of Peter Pan in 1953. What was so different about this film? The birth of the Peter Pan story was almost synonymous with Walt’s own birth, and it was a pretty big hit with the youth of the day as a traveling show. So imagine how a young Walt Disney felt when he got to see famed actress Maude Adams come to town and star in the title role; then imagine how he felt later on when he himself got to play the title role in an adapted school presentation! Walt Disney himself was truly the original “Disney” Peter Pan.

Related: Did Peter Pan Show Up At the Met Gala?

You would think that an intelligent, innovative mastermind like Walt Disney performed above and beyond while being a student. You’d probably even assume that he graduated top of his class and was his year’s valedictorian. But these ideas couldn’t be further from the truth. Walt Disney struggled in school from a young age, largely due to the fact that he was put to work at the age of nine and had an unsteady, inconsistent, constantly-interrupted education. All in all, his formal education did not exceed an eighth-grade level! What’s more, by the tender age of 16, Walt Disney had officially dropped out of school with hopes of joining the Army to fight in World War I. He received a job as an ambulance driver for the Red Cross in France instead. While he had still been enrolled in school, however, Walt did manage to take some night classes at the Academy of Fine Arts in Chicago. And due to his many accomplishments throughout his lifetime, some of today’s most prestigious universities have actually credited him with honorary degrees. In 1938, for example, the University of Southern California bestowed him with a Master of Science. He also earned two Masters of Arts from both Harvard and Yale. So, despite having dropped out of school, Walt Disney earned three college degrees.

That’s right, the deadly pandemic that infected nearly one third of the total global population between the years of 1918 and 1920 almost claimed Walt Disney as one of its victims. The Spanish Flu hit Chicago hard in 1918, where Walt had been assigned to a training facility in the city’s south side. While many were being sent to overwhelmed hospitals in which they died (including two of Disney’s friends), Walt was sent home where his mother nursed him back to health.

Walt Disney’s very first stint in animation came in 1921 when he founded Laugh-O-Gram Studio—a small company consisting of only a handful of workers. With its modest location on the second floor of the McConahay Building in Kansas City, Missouri, Laugh-O-Gram’s signature work largely focused on the modernized retelling of fairytales inspired by Aesop’s Fables in a combination of animation and live-action recordings. When the business went bankrupt, Walt nearly lost it all, or so it would seem. Even if some historians view Walt’s Laugh-O-Gram Studio as a failure, it was also a success in that it set the stage for better things to come and gave Walt more experience in navigating all of the ins and outs of owning and running a business: knowing where to seek out help when needed, budgeting, and how to go on to create even bigger and better products.

Through the demonstration of his merits and talents, we know now that Walt Disney could have gone on to be anything he wanted. But did you know that one of the career choices he had lined up was actually that of a vacuum cleaner salesman? It was shortly after Walt had made the move to Los Angeles back in 1923 to be with his brother Roy. Roy offered to line Walt up with a job selling vacuums as a means to make a living. Fortunately, an opening for a job in animation came about just in the nick of time, and Walt didn’t have to sacrifice his heart’s desire. And boy are we glad!

10. Before Making the Mouse

Before he created that iconic mouse we all know today as “Mickey,” there was Oswald the Lucky Rabbit, who was Walt Disney’s first animal star and the protagonist of several shorts. Disney created Oswald while under contract at Universal Pictures. Therefore, when he left in pursuit of his own dreams, Oswald was still a licensed character under the Universal brand. That led to a need for establishing a new signature character: Mickey Mouse!

Related: 7 Brilliant Bunnies From the Disneyverse

Now that you know the details behind the concept of Mickey Mouse, here are a couple of interesting Mickey-focused fun facts. Walt may have imagined Mickey, but he was not the one who physically drew Mickey into being. That honor goes to Ub Iwerks, the longtime friend and animator who was with Walt throughout his earlier Laugh-O-Gram ambitions and worked for the Walt Disney Company for many years. Walt also wasn’t the one to come up with the name “Mickey” for his signature mouse; it was his wife Lillian, who preferred a more cheerful name than Walt’s intended “Mortimer.” One very personal contribution Walt delivered on, though, was providing the original voice for Mickey Mouse starting all the way back in his 1928 premiere year and continuing all the years afterward up until 1947.

Related: 14 Amazing Steps To The The Birth Of Mickey Mouse

Did you know that until the year 1936, Disney was the only animation studio that was legally permitted to produce cartoons in color? The reasoning for this goes back to a two-year contract Walt Disney had with Technicolor, which gave him exclusive rights to the three-strip Technicolor system. Therefore, when Flowers and Trees (a Silly Symphony cartoon) came out in 1932, it was the first work to utilize the full-color-three-strip Technicolor process (taking the reins from Technicolor’s previous two-color process).

Most fans understandably classify Disney works with cartoon shorts for children and family-oriented feature-length films. While this is certainly the standard and basis of most Disney productions, not all of the studio’s presentations fit the mold. For instance, did you know that Walt Disney, being the patriot that he was, even had a hand in creating animated war propaganda films during World War II? He also produced training videos for the United States military and even established a custom cartoon insignia for U.S. troops! Additionally, the Walt Disney Company worked in the development of various educational films and documentaries over the years.

6. These Are a Few of Walt’s Favorite Things

Like all creators of great works, Walt Disney admittedly had his favorites when it came to Disney entertainment. Here’s a list of some of those reported favorites:

Walt Disney was a versatile man of many talents and personal interests. One adamant obsession he proudly made known throughout his life was his fascination with trains. Even as a young child, Walt used to watch in awe as the trains passed by his house. His uncle was even a train conductor himself, literally tooting his whistle to his nephew. Later, as a well-established family man, Disney even built a miniature steam-powered railroad setup right in his own backyard! This served as the precursor to his integration of the monorail system in Disneyland Park.

We all know that there are now many Disney “Lands” across the globe, as well as a “Disney World” in central Florida, but we bet you didn’t know that there is a Disney planet as well. More specifically, it is a minor planet named after Disney himself. Its official name is 4017 Disneya, and it was discovered by Soviet astronomer Lyudmila Georgievna Karachkina in 1980.

When Walt died on December 15th, 1966, there was so much that he left unfinished. Most of us know that Walt never lived to see the grand opening of Walt Disney World Resort, nor did he get to see his other future plans come to light (like his plans for EPCOT). There was also a tentative Disney-based ski resort concept that went unfinished. The very last film project that Walt oversaw personally was The Jungle Book, which came out later in 1967. According to Disney Imagineer Marc Davis, who was behind the establishment of the Country Bear Jamboree attraction, it was his concept for the aforementioned show that gave Walt his “last laugh.” Walt Disney had stopped by one evening on his way out, and Davis shared with him the sketches and plans for the new show. Walt was so enamored by them, he literally “laughed.” Then on his way out, he told Davis “goodbye”—a phrase, Davis later recalled, that Walt Disney was never known to use when leaving for the night.

2. Holds the Record for Most Academy Awards

As of 2021, Walt Disney holds the record for having won the most Academy Awards to date. In all, his total number of awarded honors comes out to an impressive 135. And that’s not even counting the grand total of nominations!

There is a popular, overly-exhausted rumor that upon his death, Walt Disney’s body was cryogenically frozen. This rumor has been proven untrue and debunked numerous times over the years, despite the fact that it is still a widely held popular belief with some. The short and simple truth is that Walt Disney was cremated, and his ashes were buried at Forest Lawn Memorial Park in Glendale, California.

Throughout his lifetime (and despite his rise to greatness), Walt Disney always retained a lasting humility in his very essence. From his faithful devotion in driving his daughters to school personally, each and every day, to his familiarity at work and his dislike of being formally addressed as “Mr. Disney,” it can be said that his down-to-earth humility may have been one of his most admirable qualities of all. But we really can’t pick and choose because the fact remains that Walt had a seemingly unending supply of admirable qualities as both an entrepreneur and a moral, upstanding kind of guy.