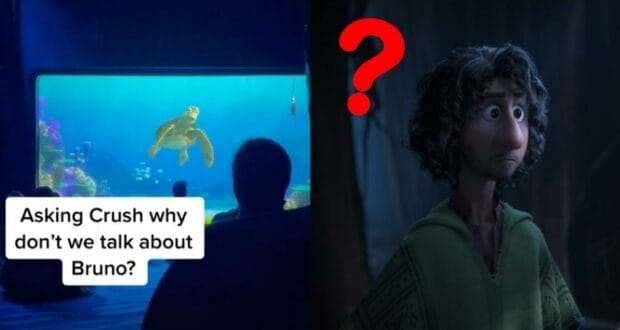 TikTok: Kid Asks Crush Why ‘We Don’t Talk About Bruno’ During EPCOT Show

At EPCOT’s The Living Seas with Nemo and Friends, the show “Turtle Talk with Crush” continues to be a crowd favorite, especially for little kids.

For years, cutting-edge interactive technology has allowed Guests of all ages to have a conversation with the most totally righteous dude in the sea. The questions kids have for Crush–and his responses–usually give their parents a hilarious improv show of their own.

Recently, a TikTok emerged of one kid asking the 150-year-old sea turtle a very important question: “Why do we not talk about Bruno?”

Watch the video below for the full exchange:

Turtle Talk with Crush is a great example of Walt Disney Imagineers’ dedication to obvious consistency. Of course, Crush would ask, “Who’s Bruno?” He lives in the South Pacific and doesn’t watch movies. Of course, he would pull out a Buzz Lightyear action figure because some poor unfortunate soul would drop his/her Buzz into the sea, and he has to bring the focus back to his Pixar crew. And, of course, Crush would need the human kids to teach him about the human stuff he found. 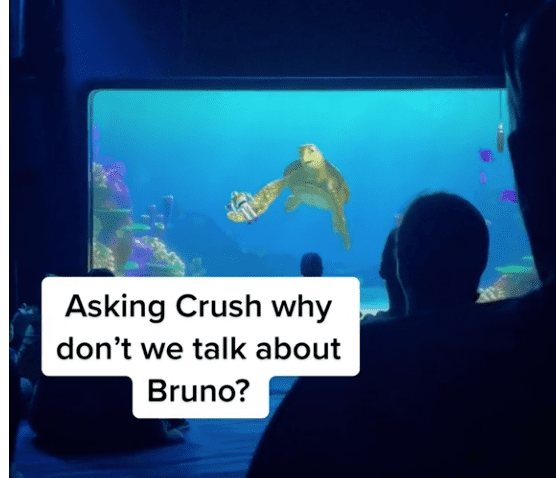 While it appears not to have made a splash under the sea, it is clear Lin-Manuel Miranda’s song “We Don’t Talk About Bruno” is still on the minds of land-lubber Disney fans of all ages. Here at Disney Fanatic, we’ve kept up with the musical number’s meteoric success as it became the first Disney song since Aladdin’s “A Whole New World” to hit #1 on the Top 100 Billboard charts and became the first Disney song ever to hit #1 on the UK charts.

Related: ‘We Don’t Talk About Bruno’ Is Being Snubbed in Awards Season: Here’s Why