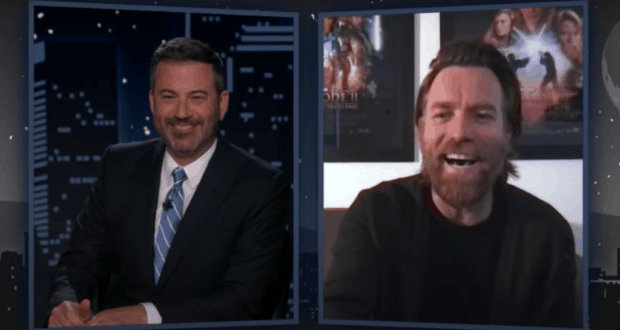 Ewan McGregor was a guest on Jimmy Kimmel to discuss his upcoming Netflix show Halston but that didn’t prevent Kimmel from bringing up the highly anticipated series Obi-Wan Kenobi. McGregor was able to stay quiet about details leaving us still anxiously awaiting more information.

Although McGregor stayed quiet about almost everything, he did mentioned that he actually shot a scene with “someone special in [his] life,” on May 4th a.k.a Star Wars day. When Kimmel asked if the person was related to him, he added, “No…not necessarily.”

McGregor also said that the costume – and the character as a whole – would look a bit different than when fans last saw him.

The new series will take place between Revenge of the Sith and A New Hope plot details are currently being kept close to the vest. One big thing that is being promised is that the series will feature  “the rematch of the century” between Kenobi and Vader.

Here is the interview:

Are you excited as we are for this new series.