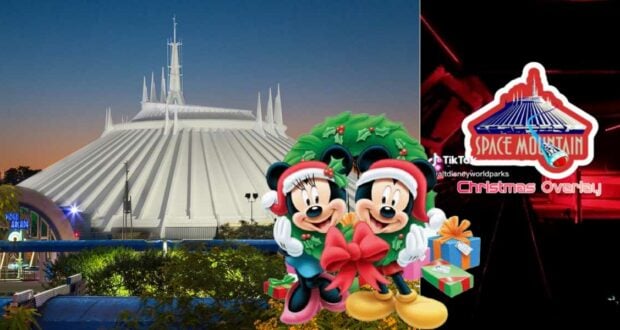 Christmas is officially at Walt Disney World, and many rides are being decked out in celebration of the holiday, including fan-favorite “Space Mountain.”

The Walt Disney World Resort and its four Theme Parks: Magic Kingdom, EPCOT, Disney’s Hollywood Studios, and Disney’s Animal Kingdom are wonderful places to spend the holidays. From Mickey’s Very Merry Christmas Party, and the Candlelight Processional to the beautiful Christmas overlay that takes over the Disney Resort, it’s a magical place to spend a Disney vacation during this time of year.

@waltdisneyworldparks on TikTok shared a video featuring some stunning scenes from the experience.

Check out the awesome experience of the attraction yourself:

The user captioned the video, “Space Mountain with the Christmas Overlay is a must at Walt Disney World.” And many users in the comments agreed as well. @Frostbite1776 mentioned, “Rode it at the Christmas party last week. It was pretty wild.” @rileytrooper even shared they wished “the cosmic rewind overlay would be like this but it’s just a Christmas song.”

Some users also expressed disappointment that the ride didn’t have its Christmas overlay during the day and only came on during the party hours.

Blast off on a rip-roaring rocket into the furthest reaches of outer space on this roller-coaster ride in the dark.

Zoom Through the Galaxy

We at Disney Fanatic will continue to report on all Disney news and Disney Parks news as it comes to light.
Christmas overlay Magic Kingdom Space Mountain The Walt Disney World Resort 2022-11-14
Priyanka
Previous: Catch a Sneak-peek of the ‘Encanto’ Special at the Hollywood Bowl
Next: Guest Finds Crack Pipe on Disney Park Property