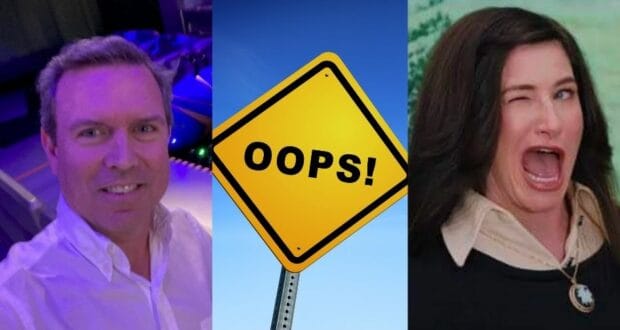 Mistakes happen. But, when you’re the brand new Senior Executive Vice President and Chief Corporate Affairs Officer of The Walt Disney Company… well, a mistake isn’t easily forgotten. And when trying to correct that mistake, things tend to get even more befuddled.

On February 22, 2022, Disney Executive Geoff Morrell took to Twitter and mistakenly leaked the grand opening of Walt Disney World Resort’s highly-anticipated roller coaster attraction, Guardians of the Galaxy: Cosmic Rewind. He quickly removed the tweet but of course, screenshots of it were everywhere across Disney fandom.

In the initial tweet pictured above, Morrell noted “Check it out starting Memorial Day weekend!” This tweet was pulled and then reposted with a new tweet (below) that says, “Coming Soon!”

The former BP Executive and Pentagon Department of Defense spokesperson has only recently become a Disney Executive, so maybe he didn’t know the process? Either way, fans aren’t letting it slide.

While we actually feel bad for the guy, the comments to the reposted tweet are rather comical. To the comments…

Of course, enter Disney CEO Bob Chapek into the discussion.

Yes, we’ve all been there!

What’s a mistake without a few GIFs to hilariously follow it up.

This will be difficult. Disney fans never forget anything.

Even a BP pun made it into the comments!

Well, regardless of what Disney decides to do or not do with the Geoff Morrell mistake, we’re sure he’s hearing it from his fellow Disney Cast Members.

In the meantime, we’re keeping our fingers crossed that Memorial Day Weekend will be the actual grand opening for EPCOT’s Guardians of the Galaxy: Cosmic Rewind. Keep your head up Morrell!