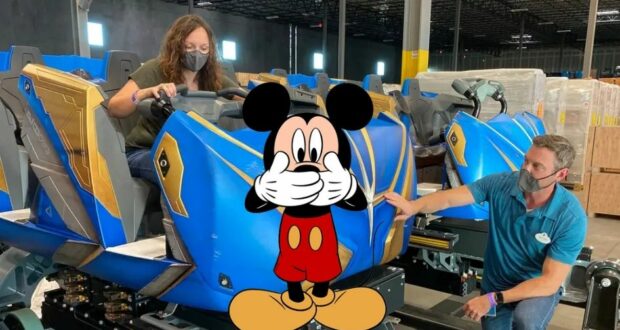 The Disney Park attraction is said to be INCREDIBLE as the family-friendly “storytelling coaster” will feature a groundbreaking ride system with vehicles that rotate 360 degrees and can even do a reverse launch!

Geoff Morrell took to Twitter to share, “Just another day at the office – got to “test ride” the new @Guardians of the Galaxy rollercoaster @EpcotCentre. @WaltDisneyCo Imagineers designed this one like no other ride you’ve ever been on. Have to ride it to believe it! Check it out starting Memorial Day weekend!”

Since the post of the tweet on February 22, 2022, the tweet has been pulled from Morrell’s page. The post was however re-posted… this time with the removed “Memorial Day weekend”… and now noted with “Coming soon!”

So far, Disney has only confirmed the grand opening for “Summer 2022”.

Disney describes the new EPCOT roller coaster as “An Extraterrestrial Escapade” with:

Begin your adventure by touring the Galaxarium—a planetarium-like exhibition showcasing the similarities and differences between Xandar and Earth’s galaxies. You’ll even get to discover some of the incredible wonders of Xandar and learn about their technology.

Just as you are about to reach the culmination of the tour, everything goes sideways, and you are called into action to help the Guardians of the Galaxy. Are you ready to rock out on an awesome quest across the cosmos to save the galaxy? It’s all up to you!

This family-friendly attraction features the first ever reverse-launch on a Disney coaster and is one of the longest enclosed coasters in the world! A new innovation from Walt Disney Imagineering—this coaster rotates 360 degrees so you can focus on the action!

Disney has released a first look at the Guardians of the Galaxy: Cosmic Rewind Ride vehicles as shown in the brief video below.

And check out the impressive movement of the ride vehicle as it rides through a test track. Eek! We can’t wait.

Will the new, highly-anticipated coaster still open Memorial Day weekend as the new Chief Corporate Affairs Officer shared? We’ll keep you posted as we learn more about the possible opening date for the new EPCOT coaster.