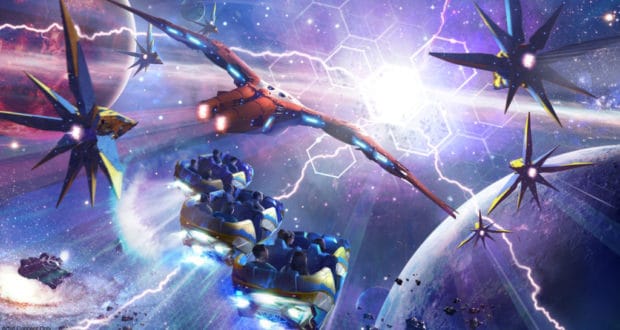 What We Know So Far about Epcot’s Guardians of the Galaxy: Cosmic Rewind

Ever since the first announcement came in 2017 that Walt Disney World Resort in Florida would premier a brand new Guardians of the Galaxy themed ride, faithful fans of those famed intergalactic misfits and thrill ride seekers alike have been eagerly awaiting word on any and all developments attached to the project. Unlike the previous Guardians of the Galaxy – Mission: BREAKOUT! attraction at Disneyland, which replaced the California park’s former version of the Twilight Zone Tower of Terror, Disney World’s concept promises something new entirely. And when we say “new,” we’re talking about incorporating the latest in revolutionary technology, and several firsts—both for the Walt Disney Company and for theme park attractions in general.  While there’s still much to learn and plenty of facts that still need to be finalized, here’s what we know so far about Walt Disney World’s Guardians of the Galaxy: Cosmic Rewind.

You may be wondering just where the out-of-this-world location for this ride is going to be. The short answer is EPCOT. More specifically, Guardians of the Galaxy: Cosmic Rewind will be located in what will be Future World’s newly designated World Discovery “neighborhood,” which is one of three new sections currently being established within the Future World divide. This area of Future World, which will also be home to already familiar attractions like Mission: SPACE and Test Track, will be dedicated to space, science, and technological innovations.

2. The first of its kind pavilion in EPCOT

Since opening, EPCOT has been committed to engaging park visitors in educational and cultural experiences that keep interest and entertainment at the forefront. While Marvel’s Guardians of the Galaxy may be science fiction, it still works well in presenting a space-themed culture to fit nicely in the new World Discovery neighborhood in tandem with other outer space fixings, including the aforementioned already-popular Mission: SPACE attraction and new Space 220 restaurant. All the same, up until this point EPCOT’s varying pavilions have all stayed grounded to Earth’s diverse makeup. This one will be the very first “other world” pavilion ever to emerge on the scene. And in keeping with EPCOT’s erudition initiative, the overall adventure begins with an exploratory planetarium-modeled exhibition known as the “Galaxarium.” Here guests will not only learn about the culture of the fictional world of Xandar but will also discover the vast similarities it shares with Earth’s own galaxy, including its formation and other scientific elements. So initially, by learning more about Marvel’s comic world visitors are delving deeper into a working knowledge of Earth’s own planetary wonders—an ingenious teaching method indeed!

3. What sort of attraction is it?

Guardians of the Galaxy: Cosmic Rewind will be an OmniCoaster rollercoaster, which will premier a whole slew of innovative features we will get into more detail about a bit later. In sticking to the basics for now, the rollercoaster will follow suit the way all other Disney attractions do in delivering on an elaborate, very specific storyline. Also, like many of Disney’s most famed favorites, Guardians of the Galaxy: Cosmic Rewind is to be dark ride experience presented in an entirely enclosed format.

It goes without saying that the story arc for this ride utilizes thematic elements taken from the Guardians of the Galaxy franchise. The presentation, however, is done up as an original plot all its own rather than an interactive ride-through reenactment. Currently, the tentative working concept is that the Nova Corps, having arrived on Planet Earth, are now inviting guests to learn more about Earth’s galaxy and Xandar treasures via the Galaxarium we previously spoke about. Riders will board their own ships for an expedited visit to Xandar, all while gaining valuable insight and informative knowledge focused on deep space travel and the formation of the universe. But riders beware of eminent interruptions when Rocket Raccoon and the rest of the Guardians of the Galaxy crash the party and things really take off with a bang. More specifically, it’s a high-speed retrogress all the way back to the Big Bang! Expect mounting mayhem, out-of-this-world action, jerks, turns, and sudden jolts that keep with a rhythmic pace set to mixed-tape music favorites from the famed films.

Guardians of the Galaxy: Cosmic Rewind will be huge in so many ways. It will not only be one of EPCOT’s newest next big-ticket attractions in popularity; it will also, quite literally, be one of the largest enclosed rollercoasters ever constructed in the world (and arguably in the galaxy). The site was previously home to Ellen’s Universe of Energy—a lengthy attraction clocked at 45 minutes, which combined spectator viewing with an interactive ride-through experience. With that being said, plus the added construction and modifications that have resulted in finalizing the project, it goes without saying that there is plenty of space to do a lot with the new all-immersive Guardians of the Galaxy experience fans are eagerly looking ahead to. This includes the queue, preshow, interactive extras, and overall thrilling adventures that come with the ride, of course. As a point of reference regarding the massive scale, Disney has said the overall building in which the rollercoaster will be housed boasts a volume so grand that four Spaceship Earths could fit inside it!

The new OmniCoaster technology behind this ride’s galactic gallivanting action incorporates new, never before utilized technological features in this particular way. In conjunction with Netherland-based rollercoaster manufacturer Vekoma Rides, Walt Disney Imagineers have constructed this storytelling coaster in a way that riders aren’t just viewing the story or even moderately experiencing the events as they are being played out. Instead, they will find themselves completely immersed in the full-throttle thrills and adventure happening all around. Seats aren’t merely for spectator viewing; they play a vital part in the overall storytelling by incorporating traditional Omnimover technology that enables riders to rotate in every direction, including a full 360 degrees. Another awesome aspect worth mentioning is that this rollercoaster will even be capable of a reverse launch—adding yet another notable first for Disney. Each riding vehicle will have its own set of speakers, keeping with the accompanying mixed tape tunes guests will be hearing at each and every twist, turn, dip, and other high-speed highlight.

7. Do we have an official opening date?

At this time we do not know of an official opening date for Guardians of the Galaxy: Cosmic Rewind. What we do know, however, is that the Walt Disney Company has repeatedly stated their plans to have the attraction up and running and ready for adventure in time for Walt Disney World Resort’s 50th Anniversary Celebration. But due to recent, unprecedented challenges, delayed openings for many Disney attractions are already verified. Therefore, it goes without saying that this ride will be opening a little later than what was once projected as well. While the original, tentative calendar marker had this one set for 2021, it is now more likely to open sometime in 2022 or well into 2021, given the most optimistic best-case scenario. Disney has not yet made any official statements pertaining to the set opening date or delays it will run into, so until we know differently, this is a mere projection based on patterns we’ve already seen regarding other upcoming attraction delays.

Whether it opens later this year or well into the next, one thing we do know is that when Guardians of the Galaxy: Cosmic Rewind does finally open it will have been worth the wait! Do note that while this attraction remains in a conceptual construction phase and some details need to be finalized, certain aspects in story plot delivery do remain subject to minor changes. All the same, we have plenty to be excited about, because the adventure awaiting us is unlike any ever before experienced at any Disney Park or anywhere else in the universe for that matter.