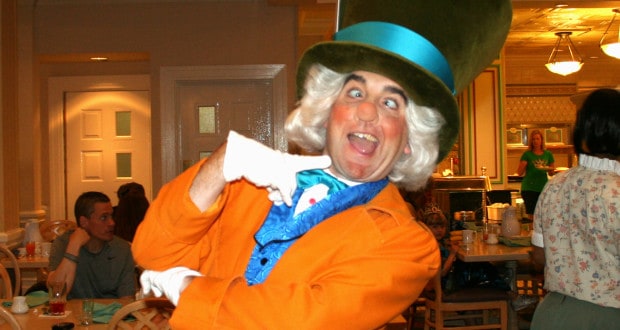 Hats off to Mad Hatter Day!

Did you know that October 6 is officially known as National Mad Hatter Day? That’s right, that crazy classic character, who first appeared in both of Lewis Carroll’s “Alice” books (Alice’s Adventures in Wonderland and Through the Looking Glass) has his very own national day for celebration! Thanks largely in part to the Walt Disney Company’s developments of the character throughout the years—first in their original animated feature film Alice in Wonderland (1951), and then those later tidbits that emerged with the live-action Tim Burton adaptations of Alice in Wonderland (2010) and Alice Through the Looking Glass (2016)—this zany hatter has shifted from what was once originally an obscure literary reference to a pretty popular, and (dare we say?) likable guy. So in honoring him and all his lovable lunacy, we’ve devised this list of trivia facts to allow you the chance to learn even more about the Mad Hatter and the many methods to his madness.

Related: 98% Of Adults Can’t Answer These 10 Questions About Alice In Wonderland (The Book)

6. What’s the significance of the date October 6?

Are you wondering what makes October 6 the Mad Hatter’s official celebratory day? It all goes back to that “10/6” reference you may or may not have ever noticed on the side of his hat. When famed English illustrator John Tenniel was tasked with producing 92 drawings to accompany Lewis Carroll’s first installment, Alice in Wonderland, he visualized the Hatter character as wearing a large top hat. The included “10/6” numbering actually denotes that the hat costs 10 shillings and six pence. So it really has nothing to do with the date October 6, but it still works out well, all the same. Disney followed suit by including the 10/6 on the Hatter’s Hat in their animation as well.

Despite all the common misconceptions about the Hatter, Lewis Carroll did not ever actually refer to this character as being the “Mad Hatter.” However, given the typical hatter connotations for madness and the fact that the idea of being “mad as a hatter” predated even the “Alice” stories, it goes without saying that a hatter would likely be mad. The historical reasoning behind why hatters were mad can be linked to documented mercury poisoning cases that many suffered from due to the mercury that was used to cure felt when making hats.

4. Possibly inspired by an actual person

It may be quite possible that the Mad Hatter character wasn’t an entirely fictionalized construct born out of the mind of author Lewis Carroll. There may actually be evidence to support that the inspiration for the Hatter came from an actual contemporary of Carroll’s own time—a man named Theophilus Carter. Somewhat of an oddball in his day, Carter was a known furniture dealer based in Oxford, England and was often seen standing in the doorway of his shop wearing his signature large top hat.

Related: What Alice In Wonderland Character Are You?

3. An Inspiration to Others?

While it can inconclusively be deemed that the Mad Hatter character may have been inspired by an actual living person in history, there is Disney-validated proof that their own animated film adaptation’s personal likeness served to further inspire later characters in Disney film and entertainment. The easily recognized Hatbox Ghost in Disney’s Haunted Mansion attractions has been said to be influenced by the Mad Hatter, though some sources also say that this character’s appearance gets some of his design from Lon Chaney’s Man in the Beaver Hat portrayal in the 1927 film London After Midnight. All the same, the Hatbox Ghost has been called “the Maddest Hatter of them all” on countless occasions. It’s also been stated that Disney’s animated Mad Hatter presentation partially influenced the appearance of the King Candy character featured in the computer-animated movie Wreck-It-Ralph.

2. Other appearances in Disney Entertainment

While Disney’s Mad Hatter character has most notably appeared in the “Alice” films (animated and live-action presentations, alike) he can also, quite obviously, be found around various designations at Disney Parks the world over. What may be less obvious, however, is just how many appearances he has made in other Disney films and televised works. One example is Disney’s Adventures in Wonderland television series from the 1990s, in which all of Wonderland’s diverse cast of characters had co-starring roles. The Mad Hatter has made guest appearances in plenty of other television shows by Disney as well, including the animated series Bonkers from 1993 and Disney’s House of Mouse in the early 2000s. He can also be spotted during the finale in the Walt Disney special This is Your Life, Donald Duck and he has also made cameos in numerous alternative presentations, including the direct-to-video film The Lion King 1½, Ralph Breaks The Internet, and Disney shorts like “Pit Crew,” and “Electric Holiday.”

Related: Disney Brings The 50th Celebration To Disney Plus

The Hatter wears many hats, so to speak, regarding how he has been presented throughout various adaptations over the years. And while we previously commented on the likely real-life inspiration for Lewis Carroll’s Hatter character, Disney’s versatile portrayals via various works all tend to take on a somewhat personalized approach, influenced by the actor in the hat during a given role. It was Disney-renowned comedic actor Ed Wynn who carried out the Hatter’s original, undeniably most defining portrayal when he voiced the character for the 1951 animated film. But it wasn’t only his voice talents that Wynn contributed to the role. The actor himself served as the physical prototype Disney animators initially drew inspiration from as well.

When The Disney Channel series Adventures in Wonderland aired between 1992 and 1995, actor John Robert Hoffman wore the Hatter’s hat. Under his deliverance the Hatter’s character donned a far younger appearance, highlighted further by his dapper, all-purple suit ensemble. And, as was the case with all of the show’s other leading players, Hoffman brought an excellent singing voice to the role.

With the 2010 release of Tim Burton’s live-action adaptation of Alice in Wonderland, the Mad Hatter character underwent even more defining developments in collaboration with what actor Johnny Depp brought to the role personally. Depp delved deeper into developing reasons for why his Mad Hatter looks and behaves as he does. His flaming orange hair, for instance, is a direct nod to the mercury poisoning the character suffers from. This also accounts for the coloring in his eyes and fingernails—the poison is just seeping out of him! Together, Both Burton and Depp concocted the concept of having the Hatter’s skin, hair, clothing, and even personality reflect his ever-changing emotions throughout the film.

In addition to Depp’s in-depth exploration into why the Mad Hatter looks and behaves as he does, the film’s storyline in general examines the Hatter’s personal history on a far more intimate level than any prior depictions. It’s even revealed that the Hatter’s real name is Tarrant Hightopp. Additionally we get to learn quite a lot about his background and personal family history.

Related: 7 Tim Burton Films for Your October on Disney+

Have all these maddening facts we’ve just presented you with driven you crazy yet? Don’t worry. Just brew up a pot of your favorite tea, don the biggest, flashiest hat you can find, and throw yourself a very merry unbirthday, to celebrate your sanity, (or lack of) in commemoration of National Mad Hatter Day!