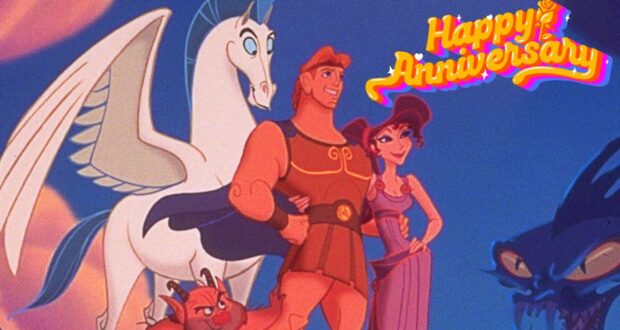 25 years later, the hero Hercules is still charming audiences with his 1997 Disney movie’s tongue-in-cheek humor, his love interest Megara’s refusal to be a damsel in distress, and a particularly catchy musical soundtrack. Disney has shared several posts congratulating the film on its 25th anniversary (just after celebrating the anniversaries of Lilo & Stitch and Atlantis: The Lost Empire)!

Disney+ shared a comical meme about online shopping as part of its congratulations to Hercules, and the general Disney Twitter account posted a congratulatory Tweet as well. You can see both Tweets below!

Hercules follows the story from Greek mythology about Hercules, the son of the Greek gods Zeus and Hera, as he trains with a grumpy satyr (who is named Philoctetes and is voiced by Danny Devito) in order to be worthy of Mount Olympus. Hercules also must defeat Hades and learn who to trust (particularly an intriguing woman named Megara, who is determined not to fall in love with Hercules but fails).

Here’s to the greatest hero that ever was! Hercules premiered in theaters 25 years ago today. pic.twitter.com/t6Z0DjIfMI

Susan Egan (the Broadway performer who developed a huge fanbase after voicing Megara in the film) shared some old photos from behind the scenes of Hercules in honor of the animated Disney movie. “Taking a trip down memory lane … Hercules has turned 25 and what a ride!” Susan Egan wrote. “For those of you noticing … I mis-pronounced Meg’s name at the audition as Meg- AIR- uh …. That line reading was from my audition! Hahah! (Glad I booked it anyway!)” she added jokingly.

Even though many other animated Disney or Pixar movies have been released with great success since 1997, Hercules is still one of the favorites for many Disney fans — and there is a new live-action adaptation of the film, directed by Guy Ritchie, coming soon. What’s your favorite part of Hercules? Is it songs like “I Won’t Say (I’m In Love)” and “Go the Distance” that draw you in, or is it the movie’s endearingly awkward Greek hero and his chemistry with his trainer Phil?