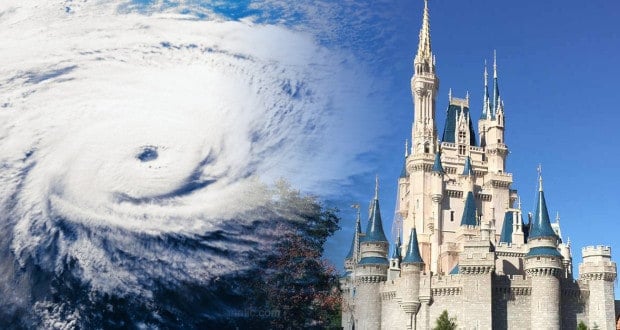 Hurricanes at Walt Disney World – 5 Things You Must Know

In my book, there is rarely ever a bad time to plan a Disney World vacation, but it’s important (necessary, crucial, etc.) to plan ahead and become educated on what each season may bring when traveling there, whether that includes exponentially high crowd levels, severe weather, or something of the like. As many of us who have summered at the most magical place on earth already know, vacationing there in those excessively warm months inevitably comes with rain. Rain is one thing—most of us can handle a few days of gloomy skies and sogginess (and lower park crowds!)—but major storms are another. Yes, indeed, Florida IS the Sunshine State and boy do we see—and feel—plenty of it, but we also have a penchant for cyclonic storms and experience some pretty wicked weather as a result.

Florida’s official hurricane season is approximately 183 days long (beginning June 1st and ending November 30th), peaking in the August and September months. Walt Disney World opened in 1971, which means they’ve endured roughly 8052 days of hurricane season. Disney World hasn’t had to close their gates often because of a hurricane, yet it has happened. Past hurricanes like Floyd, Charley, Francis, Ivan, Jeanne, and Wilma have resulted in either entire day park closures or modified park hours (delayed opening or early closing). Of these hurricanes, Charley hit Orlando the hardest, yet there was no irreversibly devastating impact to Disney World specifically (though some attractions bore structural damage in need of repair). With history revealing only a small number of actual Disney park closures and because of the favorable geographic location of Walt Disney World within the state of Florida (more on that later),the chance of you having a completely ruined trip at Walt Disney World due to a hurricane or storm are slim. But that does not mean that hurricanes shouldn’t be treated as the destructive and often fatal force of nature that they are. In truth, every storm, from tropical depressions to high category hurricanes should be taken seriously and treated with precautions in place. Just because Disney World hasn’t faced a truly cataclysmic storm, doesn’t mean it can’t happen. If you are planning a vacation during these sometimes tumultuous/sometimes uneventful hurricane months, my advice is to hope for the best, but plan for the worst. Like my father always says, “Life happens, and sometimes it happens to you.” So what can you do to prepare in advance when traveling to Walt Disney World during hurricane season? Here are some things to consider:

Any time a hurricane begins a projected path towards Florida and appears to simultaneously coincide with your upcoming Disney vacation, it’s time to start truly considering the risk and determining whether traveling to Disney for you and your family is wise. Unless there is a mandatory evacuation notice issued by state officials, the decision of whether or not to attempt travel falls solely on the vacationer. Luckily for those who have booked their vacation package directly through the Walt Disney Company, there is an option to cancel your trip without any penalty fees incurred. According to the official Walt Disney World website:

“If a hurricane warning is issued by the National Hurricane Center for the Orlando area—or for your place of residence—within 7 days of your scheduled arrival date, you may call in advance to reschedule or cancel your Walt Disney Travel Company Magic Your Way vacation package and most room only reservations (booked directly with Disney) without any cancellation or change fees imposed by Disney.”

This cancellation policy does not apply to third-party suppliers (such as airlines, hotels not booked through Disney directly, car rental companies, etc.).

Arguably, the biggest threat to a storm disrupting/ruining your Walt Disney World vacation might be travel related. Flights could be cancelled and airports could shut down due to an impending storm, and we’ve seen road closures as a result of storm surges. In addition, for good or bad, the aftermath of a storm could result in the extension of your vacation as you (and generally hordes of other travelers) make arrangements to get back home after a previously cancelled flight.

For peace of mind, this decision seems like a no-brainer to some. For others, it’s not even a consideration due to its costly expense. But if you are vacationing to Walt Disney World during hurricane season—especially when it peaks in August and September—trip insurance might be worth a second thought.

If you are at Walt Disney World when a major storm hits, you can find some measure of comfort in knowing that there is an elaborate and incredibly thorough procedure in place to help ensure the safety of each and every guest. While it might be all too easy to cling to the idea that there is a magic weather bubble surrounding the Walt Disney Resort, we recommend that everyone exhibit good common sense if a high category hurricane is barreling towards Walt Disney World and simply avoid it altogether. However, if you have already arrived on property when a strong storm hits, there are certainly worse locations you could find yourself at. As far as safety goes, in 2009 the NOAA issued the Walt Disney World Resort a Storm Ready designation, meaning you are in very capable hands should the worst occur. In addition to the readiness of the Cast Members following procedure to safeguard your protection, Walt Disney World was built with the knowledge that Florida sees severe weather—including hurricanes—from time to time and has been reinforced to resist and withstand hurricane damage.

Though it’d be foolish to completely rule out the possibility of being hit directly by a monster of a hurricane, the geographic location that Disney World is placed within Florida couldn’t be any more favorable as far as weathering hurricanes goes. It is so far inland that tidal surge is not truly a worry and storms typically break up quite a bit by the time it reaches the central part of the state.

2. The Closing of the Parks

The Disney Parks are open 365 days a year and rarely ever see an unexpected closure. As mentioned previously, however, there have been a few hurricanes that were serious enough threats to have caused Disney to close the gates for the safety of their guests. When Disney closes their parks, guests are asked to shelter at their resort for the duration of the storm. In the past, guests who have been on property when such an instance has occurred have reported that Disney not only amps up the resort activities—providing a refreshing distraction via lobby games, character meet and greets, movie marathons, etc.—but they also have an incredibly organized food system in place, ensuring that each and every guest get served their proper meals as well as an adequate supply of snacks. Previous accounts claim that each resort room had a detailed instruction sheet slipped under the door, erasing any confusion and answering questions guests might have had about what to do and how to proceed during the storm. I’ve yet to read an account of a previous guest who found themselves in miserable conditions while hunkering down at their Disney resort. In fact, I’ve encountered more stories than not of guests who wholeheartedly enjoyed the unusual circumstances they found themselves in on those particular hurricane lockdown days and the measures that Disney took to not only ensure their safety and well-being, but also to create an environment free of chaos and panic, while providing the Disney magic even in the midst of the storm.

1. When the Parks Stay Open

If a hurricane is not a direct threat to the Walt Disney World Resort area, there is a good chance the parks will remain open. But keep in mind that though the parks may remain open, many—if not all—of the outdoor attractions will stay closed during inclement weather. Periodic spells of high winds and heavy rain can be expected if a storm is moving through the state even if Disney is out of the direct line of impact. As a result, certain low-lying areas prone to flooding could also potentially be roped off. Much of the entertainment is moved indoors; you’ll see far more indoor character meet and greets on a stormy park day than you’d experience on a sunny one. All in all, so long as the safety to their guests is not compromised, guests are permitted entrance to come and enjoy the indoor attractions, restaurants, character greetings, stores, etc., and Disney will do everything in their power to ensure you are still having a great experience. The magic doesn’t die just because Mother Nature is throwing an angry tantrum outside. The guest experience is of the utmost importance to Disney and they strive to exceed your expectations, regardless of whether or not the sun chooses to shine that day.

Have you ever been at the Walt Disney World Resort during an imminent hurricane threat? Share your experience with us below!