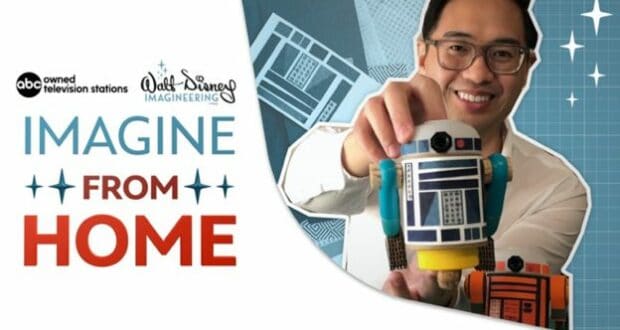 “Imagine From Home” Bring Disney Imagineers Into Your House

Imagine From Home is a new series you can find on different streaming apps that features Disney Imagineers bringing step-by-step activities into the home.

Walt Disney Imagineering and ABC have proudly collaborated on “Imagine from Home,” a new interactive video series on the streaming apps for the ABC Owned Television Stations. In each episode, Disney Imagineers share their skills and passion by showing you step-by-step instructions to draw or craft something inspired by beloved Disney Parks attractions using materials you can likely find around your home.

From building a droid out of a soap bottle to creating an “it’s a small world” cardboard toy, get creative with Disney Imagineers and “Imagine from Home”! All five episodes, ranging in various levels of complexity, are now available on ABC Owned Television Stations’ 32 connected TV apps across Android TV, Amazon Fire TV, Apple TV, Roku and on imaginefromhome.com:

Each of these are fun, hand-on activities that will get kids involved and interested in STEAM.