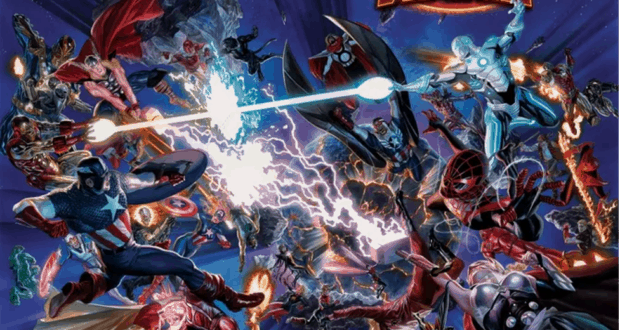 Marvel is keeping us busy with all the new shows, movies and gossip that could be coming in the future but may not be.  We now have another possible movie coming from Marvel- Secret Wars.

Former Marvel Comics Editor-in-Chief Jim Shooter seemed to have been approached by Marvel regarding what a Secret Wars novelization would look like.  Once Shooter looked into what was being asked of him, he realized that it wasn’t just the novel they wanted but that they were working on a motion picture.

For those who aren’t familiar with the original Secret Wars storyline, it essentially revolves around a massive cosmic content where several heroes and villains are brought together on a planet known as Battleworld to face off against each other. The title was later reused for a 2015 storyline which revolved around the destruction of multiple universes.

Now like with a lot of the other information coming in about Marvel, we don’t know if this is 100% true so don’t get hooked on the idea yet.  We will have to wait to see if Shooter’s predictions are right.