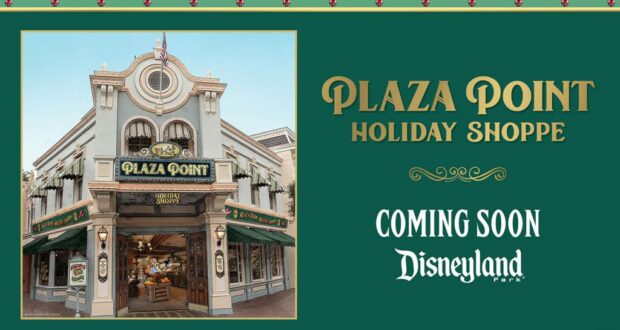 JUST IN: Disneyland Has A New Holiday Store

Disney has been releasing plenty of new attractions, restaurants, merchandise, and festivities for Disney Guests as part of the 50th anniversary and Halloween celebrations–but as it turns out, the releases aren’t over yet! Now Disney has just announced “an all-new holiday store called Plaza Point, coming to the corner of Main Street, U.S.A., and East Plaza Street”. The news was released on Twitter in the following Tweet, and behind the scenes images and video of the store’s design have been posted on the Disney Parks Blog.

An all-new holiday store called Plaza Point is opening soon at Disneyland park! Go behind the scenes to learn about some of the store details and get a sneak peek of the skilled artistry that’s underway in preparation for opening day: https://t.co/crbVsHPKIz pic.twitter.com/3BQPZiE9Hi

Dawn Keehne, a Resort Enhancement Manager for Disneyland, spoke in the following video about the store and  “the skilled artistry that’s underway in preparation for opening day”.

The store will have a “Victorian-era” theme that “will envelop you in the warmth of the holidays” with detailing like wood paneling and plenty of holiday decorations. There will also be lots of international displays “that reflect seasonal holidays around the world and [Disney’s] ongoing commitment to diversity and inclusion”. As Dawn put it, “what really makes us special is the focus on diversity. So my team is doing everything that it possibly can to bring all these great different traditions from around the world…we have our graphic artists working hard to create custom graphic pieces to tell the story.”

Offerings at the store will include “ornaments, housewares, linens and accessories”, and the store will adapt with the holidays–so be sure to come back and shop for Halloween, Easter, the Lunar New Year, and more! There will also be Christmas items for sale year-round.

Are you excited about this new store on Disneyland’s Main Street, and about celebrating the holidays with Disney?